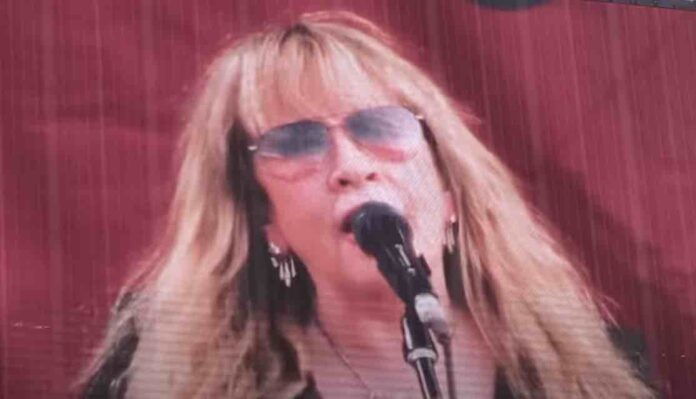 Stevie Nicks was recently witnessed paying tribute to Foo Fighters drummer Taylor Hawkins, who shockingly passed away at the age of 50. The band was due to play on the same day of his death. They were scheduled to play at the Festival Estereo Picnic in Bogota, Colombia. This led to the band reportedly canceling the rest of their South American tour.

They were replaced for the New Orleans Jazz & Heritage Festival. They were further replaced for Osheaga 2022 show as well when Arcade Fire was named the replacement.

Stevie Nicks took the stage for the first time in more than two years when she delivered a headlining set at the New Orleans Jazz & Heritage Festival on May 7. The singer had been scheduled to play a handful of dates in 2021, but canceled out of an abundance of caution.

At the show, a rendition of “Landslide” was dedicated to Foo Fighters drummer Taylor Hawkins, and Nicks teared up starting to cry. You can check out the video clip below:

The popular musician opened her set with “Outside the Rain,” a fan favorite track from her 1981 debut solo album Bella Donna. Nicks then played Fleetwood Mac’s classic hit “Dreams” and this was her first time performing the song since it received renewed worldwide interest following a 2020 viral video.

The rest of the set rolled out in similar fashion, as Nicks delved into material from her solo career, as well as the Fleetwood Mac catalog. Highlights included such iconic hits as “Rhiannon,” “Gold Dust Woman” and “Edge of Seventeen.