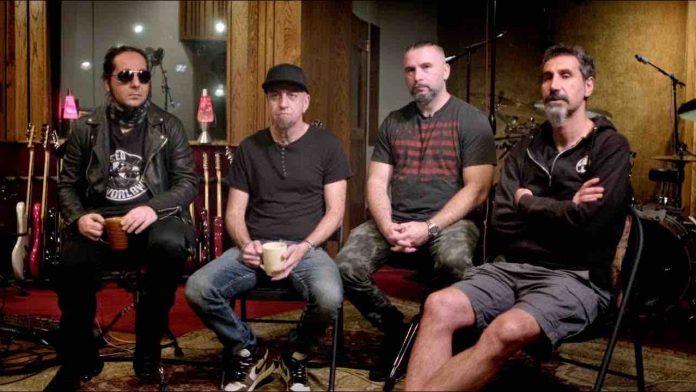 System Of A Down have always had a sound of their own. Their music and sound often has been replicated, but never duplicated. The band have always been known for their own brand of sonic booms and we are pleased to say that new music has surfaced.

“I own more than 600 SOAD bootlegs (some of which never seen the light of day) that I’ve collected over the past decade & now I am publishing them all on weekly basis.”

Two 1998 recordings surfaced. The first one showing System of a Down rehearsing before a show at Bojangles in Sacramento, CA in December 1998. By the end of the clip, the group receives the news of Snot frontman Lynn Strait’s passing.

In the second clip, the band is seen rehearsing before a show at the Transmission Theater in San Francisco. Both shows took place roughly 6 months after System of a Down released their classic self-titled album.

You can check out both clips below.

As of right now, the band have released a handful of songs in present day which have had pretty good reception by fans and critics alike. There are no concrete plans on the future of the band, but many believe that System Of A Down will be around here and there for years to come.

Certainly, with the love of the band, they will surely try their hardest to make anything right that they must in order to move forward in any way that they can to make their fans happy with what they have to continue to offer through shows and albums that they may release in the future.