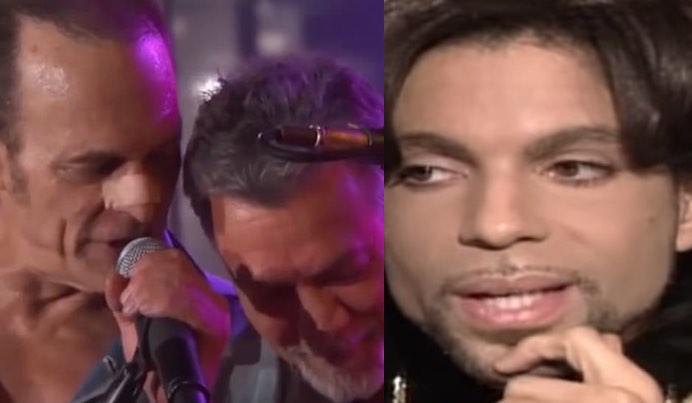 Van Halen have been in the news this year with a rumored original lineup reunion tour falling apart. Michael Anthony revealed emotional hospital photos with his family a few days ago, and he’s been busy playing with Sammy Hagar and The Circle.

Van Halen frontman David Lee Roth and the late Prince both have reputations as ladies men, and a new article has made a surprising claim about Roth dating Apollonia, who acted on Night Rider and Fantasy Island, and also worked with Prince around the release of his 1984 classic ‘Purple Rain’ after a casting call.

“I had his 1999 tape and thought it would be fun to work with him,” Apollonia told People in 2001. She also said that Prince “was looking for not just a leading lady in a film but a leading lady in his life.” At the time, she was dating David Lee Roth, who she broke up with after Prince asked.

“Prince didn’t want me to be known for dating someone famous. He made me promise I wouldn’t date anyone publicly during promotion of (Purple Rain).” She’s frequently said that she and Prince weren’t in a relationship.

She said about Prince, “He wanted to make everyone clones of himself. We had to sing like him and dress like him. I still love him, but there was a side of him that was just a tyrant.” Ultimate Prince compiled the quotes from Apollonia. David Lee Roth recently revealed a famous singer he paid $1,000 to see before he died. Roth has been busy since reviving his highly acclaimed podcast, The Roth Show.

If you try and use Dave Grohl, I mean, I could do it because I’m a pro, I can recognize the musician from across the room but is there someone certifiable that you know what you’re gonna do? You’re gonna touch your toe, you’re gonna do the mile-wide smile – actually, I can get my smile and I did this with practice because I couldn’t originally do it of course. You have to work it like the contortionists at Cirque Soleil. I can get my smile to wrap all the way around my head.”