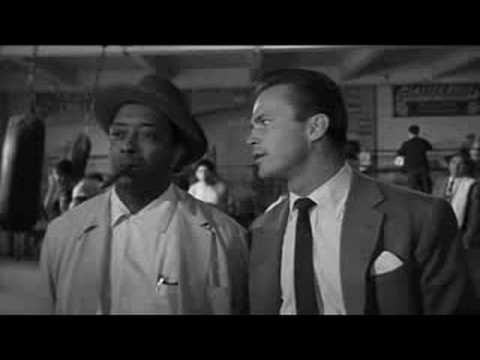 In the 1950s film noir and science fiction were two of the biggest film genres. The noirs filled the multi plexes and we’re grity,darkly lit dective films with bleak stories and inner monologues and normally more violent than other films in American theaters.  Science fiction while mostly seen as any kind if film involving space,aliens and futuristic technology. In the 1950s though it mostly referred films that had a theme of fear if advancing techonology I. With the atomic bomb being dropped only a few  years before and the starting Cold War,people were convinced the world was going to end.

Kiss me Deadly was a good example of both. The story in general is a prime example of film noir. The plot  involves a detective  who investigates the murder and torture of a female hitchhiker he picked up. The film is very dark and bleak with violence being pretty unsettling for it’s time period. The main character is also a good guy who isn’t afraid to get violent and beats answers out of people very uncommon for the Hayes Code era.

As the film progresses the sci fi elements really come into play. As he investigates the murder he comes onto a mysterious organization who are fighting over a mysterious box that  is shown to have some kind of glowing light. The film is believed to be symbolic of countries fighting over nuclear weapons as it was made during the height of the Cold War.

The film was a big influence on Tarantino’s opus, “Pulp Fiction” with a scene blatantly referencing the box. Just like how Pulp Fiction is regarded as one of the best “neo noir” films, “Kiss me Deadly” is normally regarded as the best classic era noir. The film is avaible to purchase as part of the Criterion Collection.