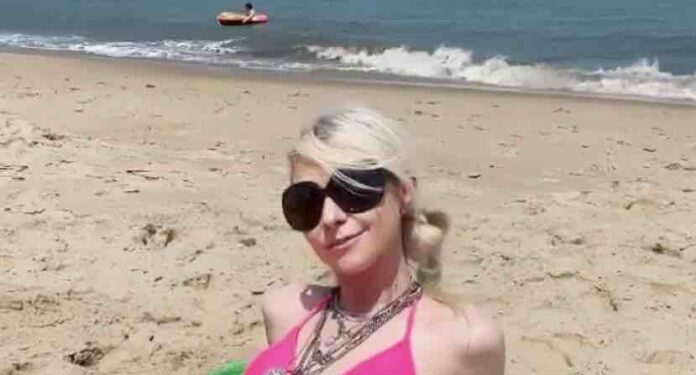 Taylor Momsen from The Pretty Reckless was recently spotted chilling out at the Virginia beach wearing a pink bikini. She dropped a video clip on her Instagram account and promoted the FM99 Lunatic Luau ’22 which will take place on May 20 at the Veterans United Home Loans Amphitheater in Virginia Beach, VA.

The one-day festival will feature bands like Disturbed, Bad Wolves, Living Colour, and way more.  The full lineup is:

The Pretty Reckless leader Taylor Momsen told Shinedown’s Brent Smith that she suffered depression and substance abuse following the 2017 death of Chris Cornell, her friend and mentor who sang in Soundgarden, Audioslave and Temple of the Dog.

She was asked for the story behind Death by Rock and Roll, Momsen told Smith in Interview, “I don’t want to get too heavy, but there’s kind of no way to talk about it without going into the losses that we experienced. We lost a lot of people very close to us.”

The Pretty Reckless opened for Soundgarden at Cornell’s final show on May 17, 2017, in Detroit. Last year, she described her final encounter with him. Momsen continued to Interview, “We were on tour with Soundgarden, which was such a peak for me. I’m the biggest Soundgarden fan in the world. Chris Cornell passed away on the night of our last show. That was crushing to me. I was not mentally prepared to handle that, and it really took me down.”

She recalled, “We were in the middle of a tour, and I very quickly realized that I couldn’t get on stage every night and be OK. I couldn’t fake it. So I canceled the tour and went home. Then, I learned that our producer Kato, my best friend in the whole world and practically a member of the band, died.”

Momsen admitted, “That was the nail in the coffin for me. I spiraled real fast: depression, substance abuse. I fell into this hole that I couldn’t get out of — I didn’t even know if I wanted to. I finally got to a place where I felt like I really needed music again I was depriving myself of it during that time, and I’d never done that.”