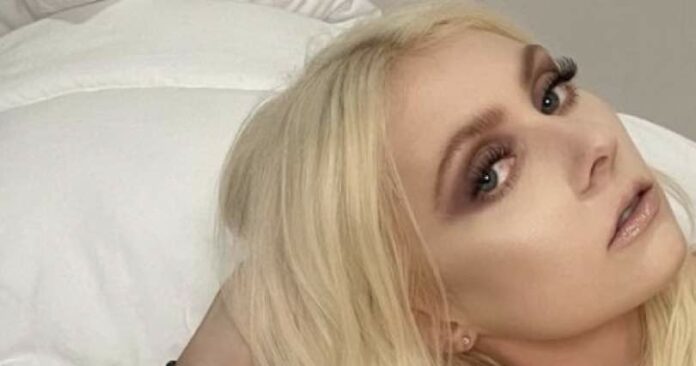 The Pretty Reckless frontwoman Taylor Momsen recently took to her Instagram account and shared a couple of pictures that saw her lying on the bed having some comic illustrations in front of her.

“Just hanging out in my @blondieofficial t-shirt reading the new #Blondie comic, story by #DebbieHarry and the fantastic @robrothnyc (give him a follow!) available NOW at Blondie.net link in story, illustrations by @seanpryor222 📸 @theartistsg”

“I never say never anymore in life, especially now with all the curveballs the world is throwing everyone,” Momsen previously told E! News at the 2022 iHeartRadio Music Awards, her first red carpet in five years. “But no immediate plans.”

It’s been about a decade since fans last saw Momsen onscreen when she played Jenny Humphrey on the OG teen drama. Since then, the 28-year-old has focused on her music with The Pretty Reckless, earning a couple of nominations at the March 22 awards show.

Momsen spoke about the band after releasing their album Death by Rock and Roll last year, they’re heading on tour this April.

“I’m just looking forward to getting back on the stage and doing what I love in front of people,” she told E! News. “It is very weird to put out an album and do tons of press and all that and acoustic performances from home and virtual things. Now I actually get to play in front of an audience and we’re just so excited to finally be able to do that again. ”