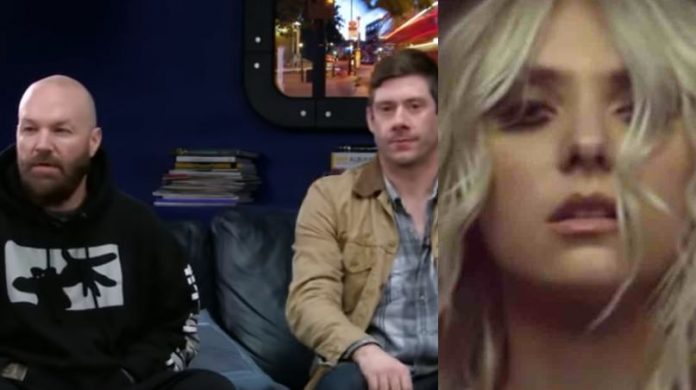 The Pretty Reckless singer Taylor Momsen appeared to hint at some sort of new project with Limp Bizkit guitarist Wes Borland in a new social media video, unless it was just a friendly shout out? Momsen wrote on Instagram on Friday, “Missing @aliejoboxblock and @chicagokar and @thewesborland …I envy you… @marvel.” Taylor Momsen was spotted kissing a woman in a photo recently.

The Pretty Reckless are making a new album, and fans on Reddit recently reflected on their debut album Light Me Up nearly a decade later. ghost_cate posted, “What’s up with the drums on their 1st album? They sound amazing, can anyone explain why? i don’t know how to explain that specific sound but it’s like they pop??? Make Me Wanna die is the best example I can think of.”

SambaLando responded, “It was the production style. They are way more processed. I think they’ve made an effort to strip back the “studio magic” and create a more organic live sound in later releases.”

Taylor Momsen recently revealed a photo of her attractive mother. Gedwyn19 chimed in, “Was the drum sound your hearing consistent on the whole album? Might have been different production – there was an EP in the early days (not sure what ‘lived’ from that and made it onto LMU aside from Make me Wanna Die) and I think a studio move in there as well. If it’s specific tunes, then maybe that’s why. I haven’t listened to LMU in a while but will go and give the drums a listen.”

Fred Durst hinted at a new Limp Bizkit album a few months ago in a Billboard.com interview, “Actually, believe it or not I still need to be as creative with Limp Bizkit as possible. I suffer a lot from not milking it. I mean financially there’s nothing coming in when you’re not out doing it. But I had to make that decision it’s about the integrity of it. It’s about what I believe Limp Bizkit is and what it is to me. So I suffer financially because I don’t do it. We get offered lots and lots of money and lots of things to do and I just became very good at saying no.” Marilyn Manson recently revealed the bold truth about Limp Bizkit.