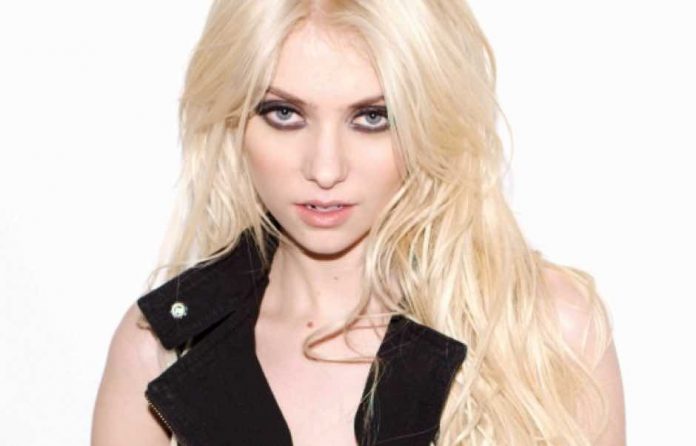 The Pretty Reckless frontwoman Taylor Momsen recently shared this photo of herself in the arms of a mystery man while wearing a fetching and drop-dead-gorgeous red leather outfit. Perhaps the only thing more gorgeous than this outfit is Taylor herself as her smokey and beautiful eyes tell the whole story. You can view this photo below. Taylor Momsen tight shorts at beach photo revealed.

Taylor Momsen ‘bends over’ in elevator photo. In other news regarding Taylor Momsen, fans recently took to social media to reflect upon Momsen’s role in Gossip Girl as Jenny Humphrey by reviewing the highly acclaimed show’s first and debut season. One fan said: The show revolves around Serena, the so-called IT girl who has disappeared for boarding school only a few months in only to make a surprise return into the city. Her old posse is all in shock when she returns and after much negative influence from Blair is axed from their inner circle. Though the narrator, Kristen Bell, keeps harping on the fact that it revolves around the lives of the rich and privileged in the Upper East Side of Manhattan – this couldn’t be the furthest thing from the truth. I adore that the show is shot in Manhattan, but it’s rarely on the UES. Many of the scenes are shot around Midtown and under. The Palace Hotel where Serena stays during the first season is in the fifties on Madison Ave. And the UES is not even all that. Everyone that lives in Manhattan knows how untrendy the UES is. It’s just a playground for married couples who have children and want to pay to overprice fees to send them to private schools instead of public schools.

Leighton Meester (Blair Waldorf) is just a bad actress. So is the young sister (Jenny Humphrey) played by Taylor Momsen. She is beyond atrocious in the acting department. If speaking like a valley girl means acting than I must have that act down pat. But, Ed Westwick (Chuck Bass) was born to play his role. Everything about his overall presence fits the part of the snotty angry rich kid that causes nothing but trouble. He wreaks havoc perfectly.
Overall there is promise for this show. It’s packed with beautiful people (for the most part) and the basic premise is an interesting spin. It’s like watching celebrities live their lives after they read their own gossip that swirls the headlines and the fury ensues.