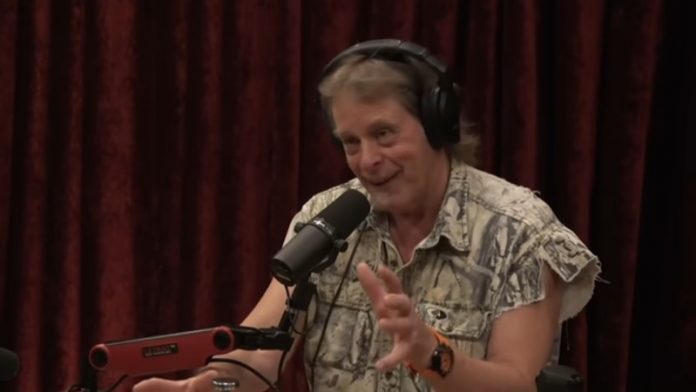 The ever-so-controversial ‘Stranglehold’ rocker Ted Nugent weight in on the now-viral moment at the Acadamy Awards between King Richard actor Will Smith and A-list entertainer and comic, Chris Rock, Smith would deliver a slap to Rock after the comic delivered a controversial joke about Smith’s wife, actress Jada Pinkett Smith. In today’s edition of “The Nightly Nuge,” Nugent would state the following. Credit to Blabbermouth for the below select remarks.

“Number one, black-on-black crime is quite visible [laughs] — it’s everywhere you go, even at the Oscars. We got broadcast globally black-on-black crime. Okay, there are several dynamics that I would like to address,” he continued. “Number one, Chris Rock has had some brilliant moments where he’s identified the failure of his culture to respond adequately and properly when pulled over by the police and how to not get killed. So we applaud Chris Rock on those rare moments where logic surfaced in his life.”

Nugent would continue: “So, there are all kinds of dynamics, but I thank Will and I thank Chris Rock because society needs to see that there’s an element of our society, most profoundly exposed in the Hollywood world, where your and my rules of engagement don’t apply. Because let’s go ahead and admit it right now: you and I would have been arrested. If Will Smith would have been a white guy hitting Chris Rock, he would have probably been taken out in handcuffs. But I’m glad that the whole world got to see it.

Nugent also stated: “But those days of defending the honor of our loved ones, in all practicality, those days are over,” Ted said. “Because if you defend the honor of your wife in such a violent manner, you’re supposed to go to jail; you’re supposed to be charged with assault and battery. That was assault and battery under any jurisdictional definition.