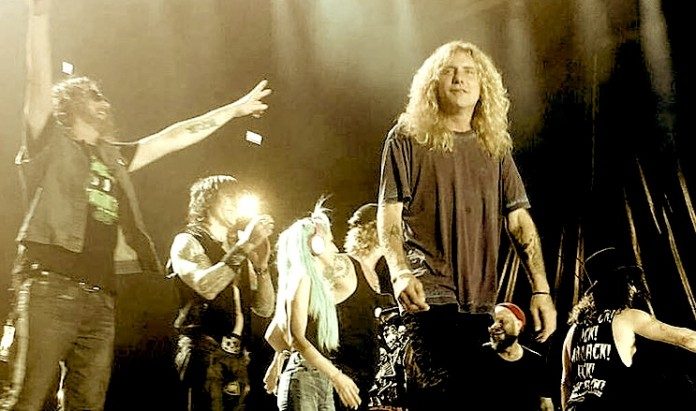 Legendary original Guns N’ Roses drummer Steven Adler sadly stabbed himself on Thursday night at his Los Angeles home, TMZ reports. A call was made from Adler’s home after 6:30PM, and when cops and paramedics arrived they discovered Adler with a stab wound to his stomach. Fortunately, Adler is expected to survive, as he was taken to a hospital with ‘non-life threatening injuries.’ No suspects are reportedly involved in the incident. Adler has been very honest about his struggles with drug addiction over the years, having appeared on the television series Celebrity Rehab.

Adler appeared to be in good spirits in recent days with his band Adler’s Appetite. The last new photo of himself before the stabbing was taken 4 days ago in Biloxi. He wrote at the time, “Thank you Biloxi, Mississippi!!! We had a wonderful time!!! #rockandroll #livemusic #gnr #doubletap #biloxi #mississippi #hardrock.”

He wrote in another post just hours before the stabbing, “Come get lucky with us at the Golden Nugget in Las Vegas July 12!!! #whathappensinvegasstaysinvegas #lasvegas #nevada #rockandroll #livemusic #gnr #doubletap #lovemyband.”

You can call the National Suicide Prevention Lifeline at 1-800-273-8255. While we don’t know for sure if this was a suicide attempt (it easily could have been accidental, there hasn’t been confirmation), always reach out if you need help. A story like this, whether it was intentional or not, is always going to bring back memories of recent rockers we’ve lost. As seen in photos and videos of Chester Bennington from Linkin Park just before his death, beneath a beautiful smile there can be a dark battle going on inside.