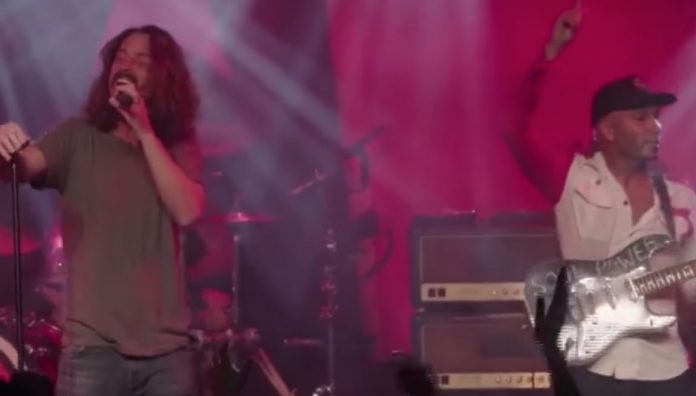 Rage Against The Machine and Audioslave guitarist Tom Morello discussed having a phone conversation with Chris Cornell about reuniting in a new Alternative Press interview. Alternative Nation transcribed his comments. Morello first discussed SAVE, Suicide Awareness Voices of Education, and how the loss of big names like Cornell to suicide has raised awareness for mental health issues.

“There’s no silver lining to any of those people passing, but it has helped to bring to the forefront the idea that depression and suicide, that that’s real. It’s not something you should hide from, there’s always help. You can engage with the world, there are people who want to help you, who love you, and are ready to help you. Just reach out for that help if you can.

Chris’ loss was particularly devastating, I paid honor to him every night at the shows. It’s indicative of these times where there’s a lot of silent suffering, and the key thing is to just to make that one call, or reach out to somebody if you are feeling that way.”

AP asked, “Did you and Chris patch things up before he died?”

“Yeah, with Audioslave we took 12 years off, but we had been friends for a few years. I was playing a benefit show in Seattle to raise the minimum wage to 15 dollars an hour. Chris and I hadn’t played together for 10 years. I just called him up and said, ‘I’m going to be in Seattle, are you going to be around, do you want to rock?’ He just said, ‘Sure.’ He came over to my house and we practiced some Audioslave songs, we did Ghost of Tom Jones, some covers. It was just so wonderful, then we were very close.

We played one last time, we played with Audioslave in January 2017. We got to rock his awesome rock god self at the height of his powers, his beautiful self, and his beautiful voice, and his magnitude of rock power. Qe got to share the stage one more time. That’s actually the last night that I saw him, I was very glad that he had that moment.”