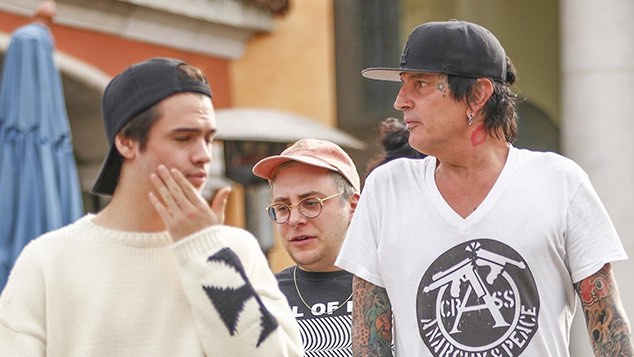 TMZ reports that former Motley Crue drummer Tommy Lee is going forward with his criminal complaint against his son, Brandon, because he believes when you coddle a child who commits wrong, you ruin him.

Sources close to Tommy tell TMZ, Tommy wants the cops to keep investigating the battery complaint he filed against his 21-year-old son, and if he ends up getting prosecuted … so be it.

Tommy thinks his ex-wife and Brandon’s mom, Pamela Anderson, is behind Brandon’s fury … when he punched Tommy so hard last Monday he was knocked out cold for a full 2 minutes. He’s especially upset with the comment Pam made to TMZ … “He punched him in the nose for all of us who he has hurt.”

Tommy believes Pam egged Brandon on after Tommy criticized Pam on social media for going on a TV show and recounting the domestic abuse in their marriage. He thinks Pam put Brandon in such a fury, he went into Tommy’s bedroom ready to fight. Brandon says he struck in self-defense.

And TMZ’s sources say … Brandon videotaped Tommy as he lay unconscious and laughed. Tommy believes Brandon sent the video to Pam as proof of performance. We’re told Pam denies that.

As one Tommy source put it, the famous drummer believes, “You encourage what you tolerate, and he’s not going to tolerate what Brandon did and that’s why he wants the criminal case to keep moving along … at least for now.”