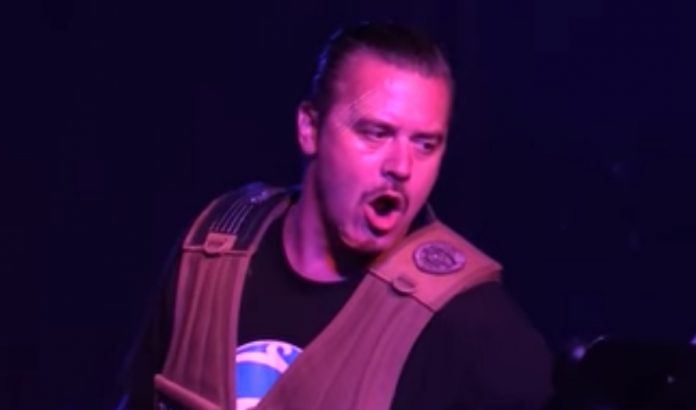 Tool fans did not give Faith No More singer Mike Patton and his band Fantomas the proper respect at a huge show, according to Dave Lombardo in a new Jasta Show interview.

“Yeah, yeah, it was awesome. I played with Slayer in the ’90s, I believe – I played twice there in Madison Square Garden with Fantomas, we were opening up for Tool. I remember that show because the crowd didn’t know what to do with this band. They were just so jarred, like, ‘What the fuck is this?!’ It was great.

That Misfits show at the Garden was definitely a highlight of my career because, as you know, Slayer was calling it quits, and they played there as well around the same time I was playing. So talk about destiny.

We were both supposed to be there regardless – I was supposed to be there with or without Slayer, and I ended up playing there around the same period with the Misfits. So it was an honor and so great working with Jerry Only, and Doyle, and, of course, Glenn [Danzig], and Acey Slade, the second guitar player. Great guys, love them all.”

Yeah, shout out to Acey, he did a great job too. He was kind of set back, I kind of felt bad, but I get it because it’s about…

“Yep, it’s about those three guys. You just do what you got to do.”

Do you think there will be more?

“I hope. That’s a band that needs to keep playing and make up for the lost time. I never knew how amazing those songs were because my introduction to punk, the Misfits had already broken up, and I was already at a different stage of the evolution of punk music.

I was getting into more of the Circle Jerks, Dead Kennedys, Suicidal Tendencies… And so, Misfits had already broken up, so I really didn’t get into their music, and as I said, I was just looking for faster, more aggressive, angrier.

But now listening back to those songs and having to play them, they have this raw, pure punk attitude and energy, and I could see why not only the logo and the name have stood the test of time, but when you’re able to hear the crowd sing over your earplugs and monitor – you know that this is special.

And those shows that we played together – every single show has been a celebration of some sorts. Everyone knows the lyrics, everybody is standing up, everybody is singing throughout the entire time. That’s something to be said. Moments like that are very unique in one’s career because they’re not always like that. So you really embrace it, you enjoy it, you cherish it, you love it, and you hope that it continues.” Ultimate-Guitar transcribed his comments.