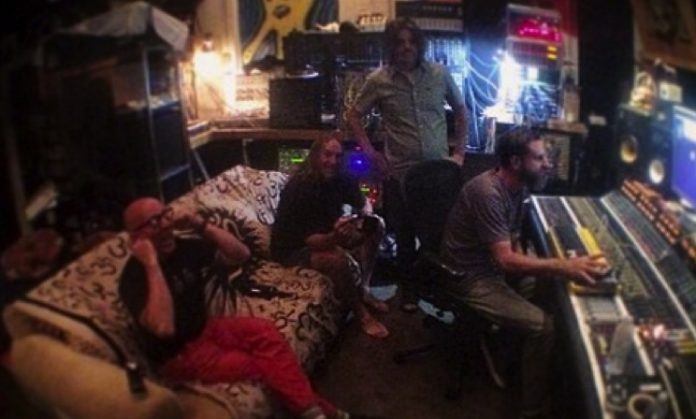 Tool guitarist Adam Jones has uploaded a new photo of drummer Danny Carey playing a keyboard in the studio, a bizarre choice for one of the greatest drummers in alternative rock history! Tool are expected to release their new album in 2019.

In a live Q&A last May, Jones discussed progress on the new Tool album. Alternative Nation transcribed his comments.

“So yeah, basically the three of us at some point you know, get together and start writing. We bring in riffs. Like I’m the guy that wants to work very simple and kind of get where we’re going and then start tricking out stuff and getting into it and Dan and Justin [Chancellor] like to like just right off the bat just like go for it and neither one of us is wrong. We get together. We jam. We have a ProTools recording, all digital and what we do is we work something out on a dry erase board and we hit record and if it sucks we erase it and if its good we keep it.

Usually we get about seven or fourteen jams that at the end of practice we make CD’s for each other and then we go home and listen to it in the car and then not worry about what we’re playing. You know, just hear it like you would hear it so we can feel it you know. And then the next day come in with ideas to keep moving on.

So on the new record, Dan’s drums are done as we said. He is very talented on his modual synthesizer and he gets something kind of cooking and plays along with it and he did that as a segway.”

“I really appreciate the support tonight. I’ve heard people yelling it out. We have this thing going and it’s not good when it’s done; it’s done when it’s good.”