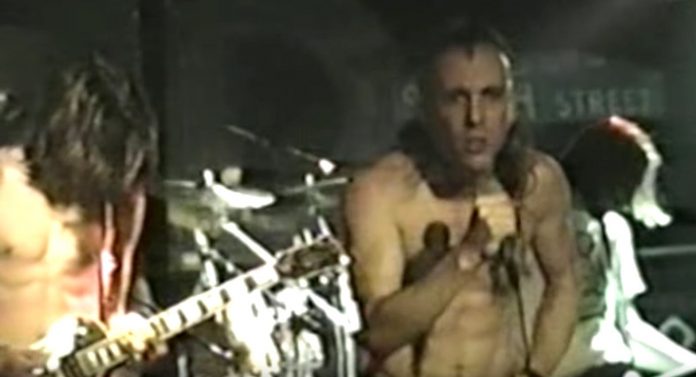 Woken100 posted the following review of Tool’s Music Clinic event in Columbus featuring Adam Jones, Justin Chancellor, and Danny Carey, including a reaction to a fan claiming Seether ripped off part of a Tool song, where they admitted their own song “Sober” sounds similar to an Eagles song.

The event was great! I had a lot of fun! I’ve had a few days to think about it and I’m still super glad I went. Here’s a random list of notes from the night:

I sat in 2nd row behind the fence above the pit. The pit at Promo West seemed to be shortened, and the band performed right in the pit. They weren’t on the stage, really. Fans directly in front of, and beside them. It was a really unique setting.

They had a couple pimped out white leather couches set up (looked comfy).

They came out to a standing ovation.

Adam gestured to the crowd to sit down, and we did. I think people would have stood the whole time if he hadn’t done so.

The first song they played was The Grudge. It was fantastic!

They took breaks between songs to discuss technique and for Q&A.

Adam was essentially the host of the event, and I thought he did great. This is the most I’ve ever heard him talk, and everything he had to say was pretty interesting or cool in some way. When it came to people shouting stuff out, he wasn’t having it! He shut any interruptions down pretty swiftly.

A question regarding a trick to doing poly/counter rhythm led to Adam leading everyone in the crowd to drumming on their knees to the cadence of something like “Pass the god damn butter.” It was a really cool moment.

The guys said that the drums for the new album are fully tracked, and bass is almost half tracked.

Maynard has all his melodies done, but possibly still has some writing left to do as the songs become fully formed.

Maynard does melodies, “like a saxophone” at first, and molds them into words as the song comes together.

They talked about how the length of discs/albums have increased over the years. Adam said they try to take advantage of as much space as possible, and this led to talk regarding the segue type tracks. This led into Danny playing his drum segue track from the new album.

Danny walks up to this giant box with mad lights and knobs on it, that sits to the back of his kit. It is a custom modulator/synthesizer thing of some type. It looks futuristic and retro at the same time.

He starts doing some wizard shit on this thing to make some really cool electric/analog sounds. He eventually gets everything set how he wants it, and then sits down at his kit and proceeds to murder it on some drum god shit. It was great. It was electronic and dark and heavy. Excellent.

A question regarding the end of Disgustipated revealed that it was Maynard’s landlord. He was really creepy, and Maynard has since lost touch with him.

Adding to questions about questionable acquaintances of Maynard’s, the “Bob Marley wannabe motherfucker” referenced on Cold and Ugly was a friend of Maynard’s. He came in with an air horn and was blasting it. Maynard said get this fucker out, and he was removed from the venue (without being harmed).

They showed the Opiate video on a TV. It was cool! I’ve been jamming out to live recording of the new opiate for a couple years now and really fucking love that middle portion. It was said that Justin came up with the riff, and had a big impact on this piece. I love it. The video was appropriately creepy for Tool. Adam emphasized how they really had no input in it’s creation, and experienced it just as we did.

They talked a lot about the crazy time signatures that they use: 17, 21, 13, 5, 7 were all mentioned, I believe. Adam acknowledged awkward head bopping when he’s playing fucked up riffs.

They played what seemed to be a portion of Rosetta Stoned to demonstrate Adam playing 5 while Justin and Danny play 7 and how this complements each other in an interesting way. I think they deviated from the song a bit to drive home the point and joked “that will be on the album after the next one.”

They are often surprised what pieces Maynard chooses to sing over.

A questioner accused the band Seether of stealing a baseline from Justin, and he seemed to be demanding retribution for the offense! Justin said he wanted to hear it, and Adam said that the Sober riff sounds just like “Those Shoes” by the Eagles, and holy shit it actually does! I’ve been rocking “Those Shoes” on repeat ever since the clinic.

“One tool fan ruined it for everyone.” – Adam, regarding video recording, locked down phones.

Adam referenced a beat machine he was using in a pinch. I really want to know what model he had. He downplayed it by saying you can get a free app on your phone for it.

They played Parabol & Parabola and then closed with Aenema. Beautiful!

I asked Justin about his bass, and he said he’s still mostly rocking with the Wal. He mentioned that he was experimenting with some new pickups. I mentioned a Warwick bass which I had heard rumors of and he said he got one when he was at their factory/shop. It didn’t seem like he was using it much.

I asked about his collaboration with Death Grips, and he said he went in about 6-7 weeks ago and rocked out with Death Grips’ drummer for a few hours, and then the singer laid the vocals like the next day, and they let Justin hear it. He said he likes their stuff and even felt nervous going into it when they reached out to him for the collaboration.

Justin was sipping a bottle of beer (Stella) while he chatted with folks.

I only got to quickly shake hands with Danny. I wasn’t able to ask any questions.

Adam wasn’t present at first, but I have heard that he did make it out eventually. I wish I could have gotten to thank him and ask a question.

They showed love and hugged all the ladies that came to mingle.

That’s all I got!