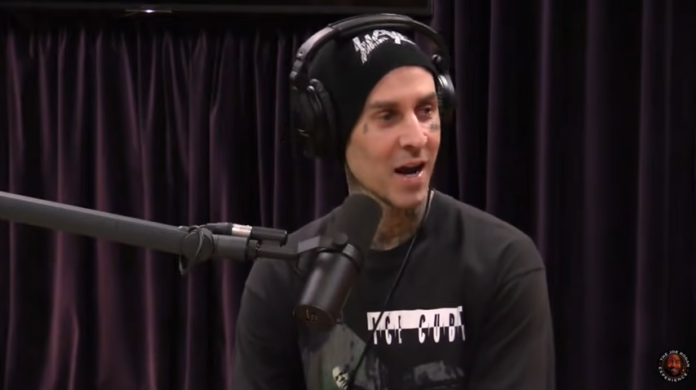 We were all very scared when news broke that Travis Barker was in need of immediate hospital care. At the time, all we were left with was an eerie Twitter post that could have very well been poetically the last post that we ever saw from the stars as he asked for religious intervention according to the tweet. Thankfully, the rockstar is doing better now than ever.

Grammy nominee Travis Barker sported a wrist brace on his left hand as he got out of the car while visiting DTA Records in Calabasas on Monday. As a professional drummer, the 46-year-old pop-punk icon has to take extra special care of his wrists and he could easily be suffering from carpal tunnel syndrome.

Travis – wearing all white – is taking it easy after his hospitalization for pancreatitis on June 28, which left him in ‘excruciating pain.’

Travis Barker would state: “During the June 27 endoscopy, I had a very small polyp removed right in a very sensitive area, usually handled by specialists, which unfortunately damaged a critical pancreatic drainage tube. With intensive treatment, I am currently much better!”

While Travis Barker is doing much better, it leads many fans to believe that he will be working on production much more now, and they would be right. With Travis Barker having DTA Records, he has been able to work with tons of artists from lesser known artists to such acts as Avril Lavigne who has seen a huge resurgence in her career, thanks to the work of Travis Barker.

We hope that he continues to do better day by day, but also understand that what he is facing is a bit of a battle that will be more uphill than downhill. With what he has been through in the past, it’s a pretty safe bet that he will prevail. You can view the photo, credited by the Daily Mail and BackGrid below.