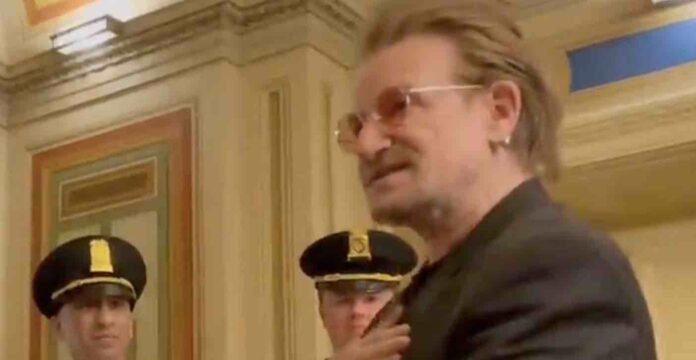 U2’s lead singer, Bono recently shed praise on the Police at the nation’s Capitol Building when he visited Washington, D.C. Paul ‘Bono’ Hewson met with officers who defended the Capitol against a mob of rioters on January 6, 2022. He told the officers they “saved America.”

“I haven’t been back since January 6th, and you guys saved America, as far as I’m concerned, from so much awfulness on that day,” Bono told a group of nine officers in a video posted by Capitol Police on Twitter. “And I just want to say, people around the world really respect you,” he said.

Never know who you will run into on Capitol Hill.

Bono, who is from Ireland but is known around the world for decades of musical hits, came to the Capitol to lobby lawmakers for a global vaccination initiative through the ONE Campaign. The campaign aims to vaccinate 70% of the world’s population by September.

The former Oasis member, Liam Gallagher recently made a bold statement of how most rock stars were “useless”, and specifically named the famous Irish rock outfit led by Bono, U2 as an example. His initial remark came as a response to Dave Grohl calling Gallagher “one of the last remaining rock stars” during an earlier interview.

Liam Gallagher opens up on U2

Gallagher was recently asked to shed light on his statement a bit more during a recent appearance at Loudwire Nights. Liam’s response saw him back-tracking a bit, although he still appears to stick to his statement. Gallagher went on to take a huge shot at U2, naming Bono & Co. as an example of rock musicians who “just live a very boring fucking life”:

“I mean, not all of them are [useless], but the majority of them are. The ones that think they’re rock stars are not, they… just live a very boring fucking life, and I think rock ‘n’ roll deserves a little bit more than just making music, you know what I mean? You gotta get out there and get yourself — you just gotta live an exciting life. It’s like U2, they pass themselves as a rock ‘n’ roll band, but what the? Come on, man, I’ve never seen f**king Bono, I mean I’ve never seen any of them do anything remotely rock ‘n’ roll.”