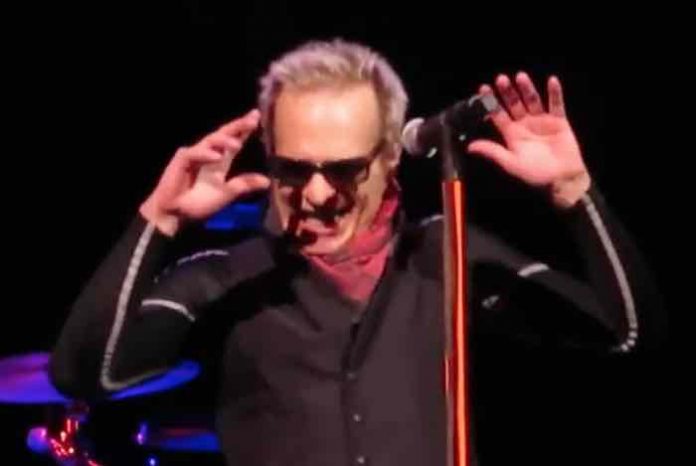 It’s easy to say that if you call yourself a Van Halen fan, you have a preference between the two main lead singers during the group’s time of prominence, David Lee Roth and Sammy Hagar. David Lee Roth was the frontman of the group from 1974 to 1985 whereas from 1985 to 1996 Sammy Hagar was the band’s lead singer. As of March 2019, Van Halen is 20th on the RIAA list of best-selling artists in the United States; the band has sold 56 million albums in the United States and more than 80 million worldwide, making them one of the best-selling groups of all time.

During a recent interview with Mitch Lafon and Jeremy White, former Van Halen bassist, Michael Anthony, who recently dropped this Eddie Van Halen drug bombshell, revealed how ‘Jump’, was a classic single that David Lee Roth tried to ultimately pull from the group’s signature 1984 album because he felt Eddie Van Halen should not be performing keyboards. Credit to Ultimate Guitar for the following.

“Nothing that Van Halen ever did was a conscious effort. Even from the beginning, Warner Brothers would say ‘Hey, what’s the first single gonna be?’ We said, ‘Hey, you guys choose it. We love all our music, we made it, so you guys choose whatever you think.’ And we never wrote that way, ‘We need a number one single.'”

Anthony continued: “When ‘Jump,’ which was our only big single from the early days of Van Halen, Roth didn’t even want that song on the album, because he’s all, ‘Eddie, you’re a guitar god, man, you’re not supposed to be playing keyboards.’ And Eddie, grew up classically trained. Piano, in addition to picking up the guitar.”

Further adding: “When Sammy joined the band, I think it was just a natural progression of the band. We just continued writing and Sammy brought in this whole knowledge of being a guitar player himself, he understood the structure of music and stuff like that. From that standpoint, where David would always write the lyrics and go, ‘Yeah, man, play that hard or whatever,’ Sammy’s like, ‘Hey, you got this chord here, what if we play this chord or whatever, make this change.”

Anthony concluded: “He brought a whole new element, and it just kind of changed the dynamic of the band. We weren’t going to continue doing what we didn’t want to continue doing, what we were doing with Dave. Because that was with Dave. It’s the natural evolution within the way the band was evolving.”