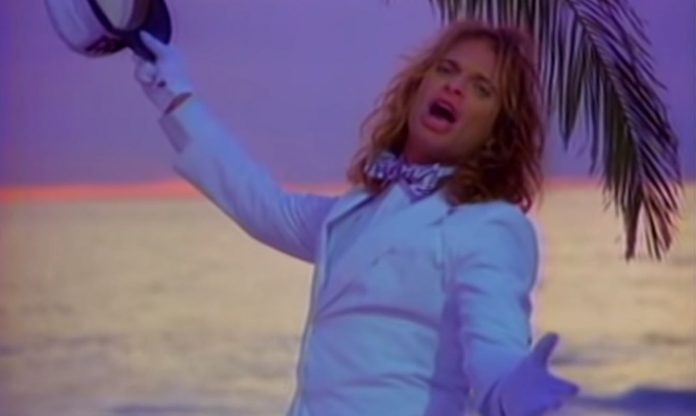 Van Halen singer David Lee Roth posed for his first photoshoot in 3 and a half years for the New York Times a couple of weeks ago to promote his newly introduced skin care line, called Ink the Original, which was created for people with tattoos. You can view the photo below, where Roth has short grey hair.

Roth said in the New York Times article, “When we were little kids, my sister and I would come up with a drawing,” he recalled. “Mom wouldn’t even look up, but she’d say, ‘Should I go get the magnet?’ That meant was the drawing good enough for the refrigerator, or were we going to waste her time? Right there, you’d look at the drawing and say, ‘I can edit!’”

Mom issues aside, Mr. Roth also showed a surprisingly practical side. “If you use something with an oil base, it’s going to reflect back in your eyes,” he said, noting that a person with a tattoo wants to show off their ink, not blind viewers with oily sunscreen.

Fans on the popular Van Halen forum VHLinks thought the New York Times could have picked a better photo of Roth.

xk319 posted, “So I guess he was going for the worst lighting worst angle worst expression possible in that photo….or……”

Dave’s Dreidel posted, “Sam looks better than most people in their 40’s. Whatever the fuck that guy is doing, God bless him. Maybe I should start smoking weed.”

Jedi McFly posted, “Ho-lee shit that photo is beyond awful. Sure, people age, but that lighting and that angle wouldn’t do anybody any favors.

What was Dave’s publicist smoking when they approved use of that pic? WTF.”

salg posted, “Not his best picture.The Times probably insisted he look professional !!! I worked for them for many years. If I was still there the story would have been broken much earlier !! Looking foward to 2019!!!!”

Rare Painful Side Effect posted, “That is a terrible photo, all right. But I don’t think anyone over 40 is going to come out of that photo set up (that angle, with lighting provided by what appears to be a WWII prison-camp klieg light) looking like anything other than an extra from the road company of Deliverance.”

Personally we think people should cut Diamond Dave some slack, he’s getting older but is still feeling very good from all accounts!

Thanks to @DavidLeeRoth & the @nytimes for stopping by the Press Lounge!https://t.co/fjMkU0ppG9