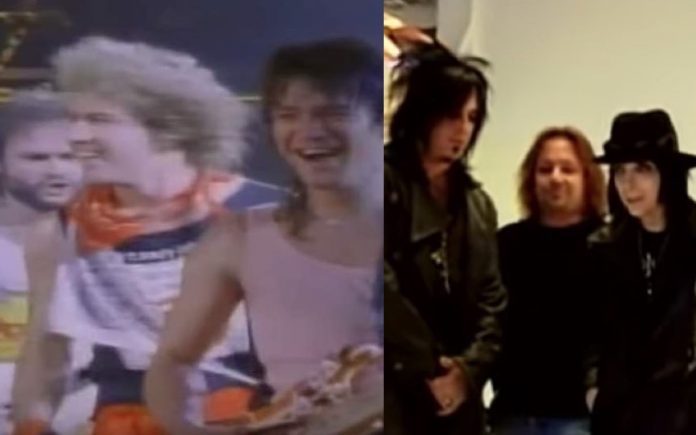 What did Van Halen Icon Sammy Hagar think of the controversial Netflix biopic on Motley Crue, The Dirt? In a recent edition of Lance Armstrong’s show, The Forward Podcast, the former frontman of Van Halen revealed how hard it was for him to get through the dubious rock film, even accusing the opening of The Dirt to being pornography.  Alternative Nation transcribed Hagar and Armstrong’s comments.

Armstrong: Hey did you see The Dirt? It’s cinematic, it feels like a documentary but, and this is for the listener, maybe you’ve seen it but did you see it on Netflix?

In related Motley Crue-Sammy Hagar news, Sammy Hagar was interviewed on a podcast recently, and he shared a story about how Motley Crue founding member and drummer Tommy Lee once had his teeth knocked out by his own son and Hagar’s advice for Lee afterward. He also discussed if he heard Lee has a will. Alternative Nation transcribed his comments.

Hagar: He [Tommy Lee] is a great guy though, he’s like Eddie [Van Halen], he’s kind of troubled and always seems to find trouble. I just talked to his manager a couple of weeks ago. That manager manages someone else and I was doing a Rock and Roll Road Trip with and I said: “Hey, how’s Tommy doing?” and the manager went:

“Ah, you know, his son, punched him out and knocked his teeth out.”

Host: I did read that.

Hagar: The manager said that Tommy was using his own son and then I said: “well what the fuck, Tommy doesn’t have to sue his son. Just tell him to take him out of the will.” His reply:

There was an infamous viral video last year released after Brandon Lee allegedly knocked out his father Tommy Lee for comments he claimed he made about his mother Pamela Anderson. Tommy and Brandon later reconciled, and are now on very good terms.