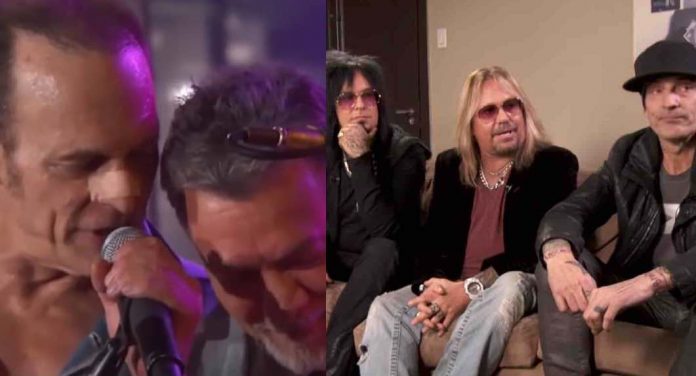 On a recent episode of The New Roth Show, Van Halen frontman David Lee Roth discussed his thoughts on rock and roll movies like Motley Crue’s The Dirt and Mark Wahlberg’s Rock Star and how the compared to his situations that played out in real life, saying it can be very true. An actor playing Roth had a party scene in the film. Alternative Nation transcribed Roth’s comments

Roth: Out front of the bar, it’s one of those scenes from every rock and roll movie that you’ve ever seen. I’m sure that the Motley Crue movie, The Dirt, has it, the Mark Wahlberg movie of Rock Star has it – there’s big hair, everybody is dressed, has shoulder pads and that was the case at that time, okay? Everybody is lined up on the streets, posing and you’re either an archetype like the bomber jacket, the five 17s, cowboy boots and the sideburns with disinterested language or you’re rock n’ roll and you’ve got a gun belt and you’ve got the low-cut, the drawstring and so-forth.

Roth: I think I started many sub-generations of mini Daves, there’s a lot of mini Daves making a living at it at this point at time, and proudly so.

Roth: My girlfriend at the time, Dottie, “Dottie the Body” and it was my sister Lisa who named her “Dottie the Body”. Dottie the Body’s body was so hottie that another girl called her “Dottie the body”. That’s how hottie her body was, okay? Dot was out of this world for twenty-five other reasons but I want you to know exactly the visual of this. I have the blue chopper with these steer horns, remember Tarzan in front and leather everything. Dottie has leather everything except Dottie has fringe that doesn’t stop when Dottie does. So, Dottie will stop and everything else does this [Roth motions] and so does everybody else in the room. Dottie could walk into the Troubadour bar, which was more important at that time than the showroom inside and there would be, say, even a thousand guys, when Dottie would walk in, the aggregate total IQ of all the people in that room would be less than people in it. Do that math.

Roth continues later in the show:

Roth: The running story for me was that I got laid twice but only visited that lady’s room once. It was with two girls. In those days it was a mighty time, using protection meant having security watch the door.

Roth: He thinks I’m kidding. Two, two, two hits in one, we’ll be right out! It’s related, it’s a motorcycle story, it’s how I got there.