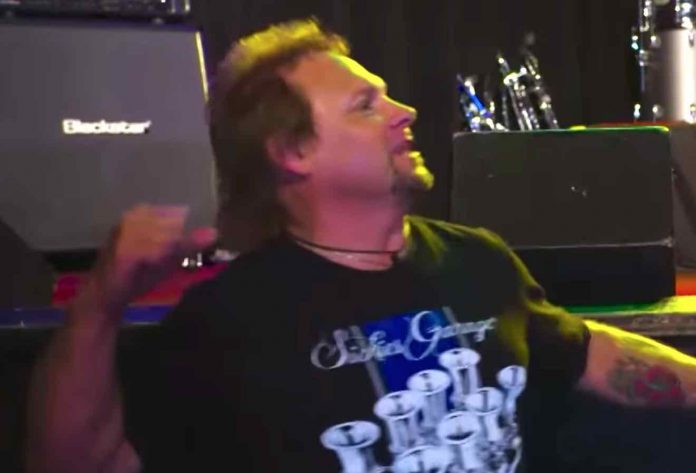 Van Halen icon Michael Anthony revealed a video of himself getting a bit tipsy in Newport Beach, California over the weekend. Anthony wrote, “All right I’m a little buzzed up on the Duffy looking at Christmas lights with the family out here on the bay in Newport. Spotted the floating bar!! #christmas #holidaylights #buzzedup #favoriteholiday #lovenewport.”

Anthony had a busy 2019 touring with The Circle, and nearly reunited with Eddie Van Halen, David Lee Roth, and Alex Van Halen for a tour before Eddie Van Halen’s rumored cancer canceled the planned shows. A Van Halen member trolled fans with a new 2020 lineup photo. Sammy Hagar has stated that The Circle plan to do extensive touring in 2020, the heaviest level of touring Hagar and Anthony have done in years.

Jason Bonham also plays in The Circle, and Sammy Hagar discussed his influence on their album ‘The Space Between’ at the Grammy Museum.

“I wanted to bring Jason’s influence [and] Led Zeppelin into the album. In The Circle, we play ‘When The Levee Breaks’, and Jason has his dad’s original drum track, and we play it through the PA. It’s so heavy. Alex Van Halen, his whole life, wanted that sound. Denny Carmassi wanted that sound. Everybody wanted that sound and that beat, so I said to Jason, ‘Give me that drum track. Let me use it in the studio,’ and I wrote a song to it.

I jammed with Jason’s dad for 12 hours, and I played this riff. It’s called ‘Can’t Hang’. Then I had to speed it up a little bit because it was too slow, so we sped his dad’s track up. I finished the whole [song] without Jason. He got so emotional — he said, ‘Oh, mate. You’ve got to let me have a shot.’ But he was on tour with his other band, and he said, ‘I’ll do it on my day off.’ On Father’s Day, on his day off, he went to a studio in Chicago and he took the track and he put the drums on it. It’s phenomenal. He channeled his dad. Everything about it was so cool. It’s as good as it gets.” Michael Anthony breaking his silence on Van Halen disrespect was revealed a couple of weeks ago.