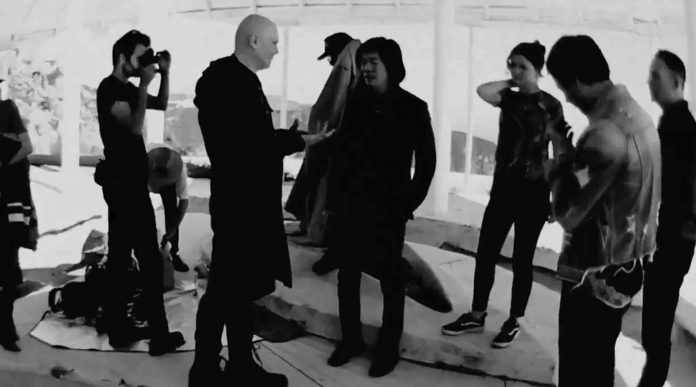 The Smashing Pumpkins have released a new behind the scenes video from their photoshoot for the Shiny and Oh So Bright tour. In the video, Billy Corgan and James Iha are seen having quite a few cute moments. Corgan recently spoke of Iha bringing the Pumpkins ‘magic’ back in the studio, and even credited him for playing bass on several MACHINA songs.

Fans in The Smashing Pumpkins Facebook group have noted that ticket sales for certain shows have really been picking up.

One fan wrote, “Interesting, I was on the Houston Toyota Arena website and noticed that LORDE still has Floor seats available for her concert and that’s this month. Yet Pumpkins have sold out all Floor seats already. I’m not dissing LORDE, I love her music but using this to show how media can twist stuff and bash who they want?”

Another fan posted a couple of days ago, “Yeah, about those ticket sales in the ‘weak’ markets. Salt Lake City on Sunday vs today. The tickets are selling without any problems, and the articles stating otherwise are clearly all click-bait.”

You can view the Salt Lake City graphic below the video.

“Almost all gone! Every show will be a sellout. No doubt in my mind.”

“Some of the venues don’t have an interactive map, however I looked at the ‘weakest’ markets that Consequence of Sound referred to, and they look similar to Salt Lake City, except for Souix Falls…I’ll check NYC and Toronto.”

“There’s a new process that ticket venues are using. From what I understand, it prevents tickets all being sold at once. That way people have a real chance at getting one. It helps fend of scalpers as well. Scalped tickets Will still exist, but not in the 1000’s like before.”