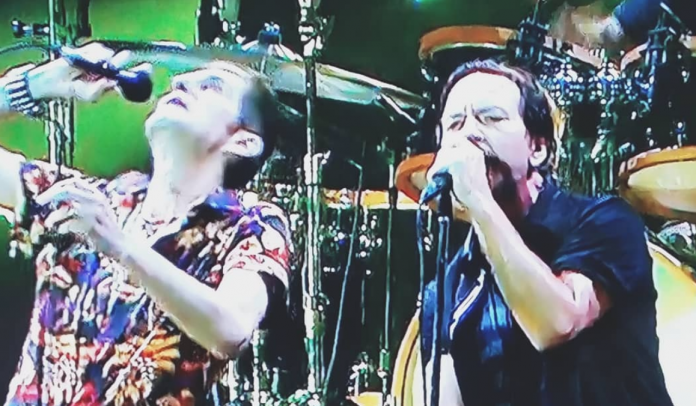 Jane’s Addiction frontman and Lollapalooza co-founder Perry Farrell has continued to engage with fans on Twitter over the cancellation of Sunday’s Lollapalooza Argentina show, which was set to be headlined by Pearl Jam. It was canceled due to ‘severe’ weather, and Farrell even linked to an article about the tragedy that took place during Pearl Jam’s 2000 Roskilde Festival performance to cite that as an example of why safety comes first.

A fan named Ninsoka tweeted a picture of a muddy concert to Farrell and wrote, “Fuck you. Show must go on!”

Perry responded, “Ninoska, Forgot about this gig. (I was there). Woodstock, where you frolic in the mud like the 60’s..(man made mud pit woohoo!) aside from the fact that it was built on a toxic waste land fill, and there were several woman raped. It ended w the grounds set ablaze. Keep reading.”

“Ninoska, But there are only 6 people silly enough to get into this ‘designer’ mud pit!! C’mon?! You’ve got to laugh.. Bet they regretted it by 3:00. And they’d see a cute guy- but they couldn’t make a connection… ‘we went in the mud pit….what’s your name?'”

A fan named Juampi tweeted Farrell, “Perry, honestly, by 2pm the sun was shining. I saw thousends of collaborators on the first two days. If they worked together a few hours, at least the main shows could got re scheduled on the same night.”

Farrell responded, “Juampi, My Friends, Please hear me a last time. I thought the same thing. It’s sunny now 2:00! I even stressed production. The final decision is the government’s. Once they declared the area unsafe, we could not refute it. With a tragedy that occurred here a few yrs. ago in mind.”

Juampi tweeted back, “If government said that ok, i thought it was a producers call. My mistake, regards!”

Farrell then said, “Juampi, How are old are you? Think my man; if people got hurt or killed after they had declared it unsafe- there would be hell to pay. People would be suing over deaths of their family. One day god willing you’ll have a business or a community to protect. Have fun don’t fukitup.”