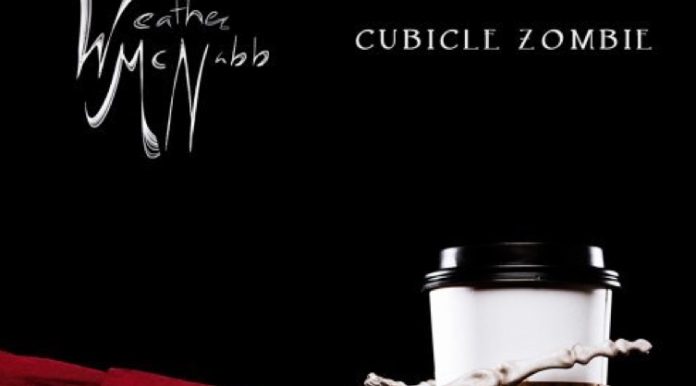 Weather McNabb is a Minneapolis born, Boston matured, singer/composer who, after a Great Recession detour (and a break to finish an undergraduate degree), is finally making her music dreams come true. After a stutter start back in 2012, Weather regrouped and connected with Peter Moore, the legendary Boston indie music producer who’s responsible for both Count Zero and Think Tree. Their collaboration lead to Weather’s powerful debut EP Cubicle Zombie, and, as is often said, the rest is history.

Cubicle Zombie features a talented vocalist at the outset of what is going to be a brilliant career. The EP’s songs defy categorization, as they slide between electronica, rock, and pop effortlessly, but remain linked thematically through Weather’s powerful delivery and sharp storytelling. It’s her voice though that anchors the whole affair and makes the story she’s telling throughout the EP so engaging. Cubicle Zombie is a young woman’s coming of age story in a world of sexism, perseverance, and self doubt. Weather’s defiance in the face of the challenges of making one’s way in the world, illustrated with her powerful voice, confirms the fact that she will succeed, both in the narrative she’s telling throughout the EP, and in her real world career.

“Good Morning,” the album’s humorous opener starts things off with a quick glimpse into the life of the cubicle worker. “The cubicle zombies are sitting and rotting/They’re dead while they’re walking” sings Weather, relating the scene inside, what is sure to be to the listener, an all too familiar cubicle sectioned office floor. “Adapted” takes a more sombre tone. “Your soul’s for sale from nine to five/This isn’t what I expected/This isn’t what I had planned/This isn’t what you told me would happen/But I’ll adapt” sings Weather over a defiant drum, bass and piano beat. The EP’s narrator is quickly learning that life in the working world, and the promises made by society’s “elders” isn’t what it promised to be, but here, Weather’s strength of delivery assures that she will continue to rise. As her defiance builds, the song crests when the strings hit and the defiance becomes more than just a sedentary resistance. “One day we will have the numbers/This world is ours!” sings Weather at song’s end, and you can’t help but believe her.

“War Paint’ is the EP’s strongest track, as well as its rock hard center. The powerful rock song is a clarion call to action and personal and social revolution. “Time to put on your war paint/Cover the fear” sings Weather, both decisively as well a little vulnerably. “Time Machine” switches gears a little sonically and builds its narrative around programmed beats and electronic flourishes. Digital and distortion washed guitar lines show up, and carry Weather’s indictment of the rampant sexism prevalent in the business world. “It’s not 1963/Welcome to the 21st Century” sings Weather, slightly menacingly. “User Error” ends the EP on an anxiously industrial note that’s worthy of of comparison to the most angst ridden of Trent Reznor’s best moments. This grimy grind of a song showcases Weather singing about how “I cannot sleep at night/These dreams and doubts entwine/They’re going to strangle me/My thoughts keep slipping back in time” (obviously to a moment of error in her job, life, career, or wherever). “Another user error/Another dumb mistake” haunts her. Who hasn’t spent a sleepless night worrying over something they messed up at work? Ending the EP on this note is a strong statement of resilient realism. The listener, once again, can’t help but believe that Weather’s narrator will overcome whatever she’s “fucked (it) up this time” though. If anyway, at least through the sheer force of will conveyed through her voice throughout Cubicle Zombie.

Weather McNabb’s debut EP, Cubicle Zombie, is available for streaming on Spotify, Soundcloud, and iTunes. Definitely check it out, and prepare to be rocked, emotionally, vocally, and musically.