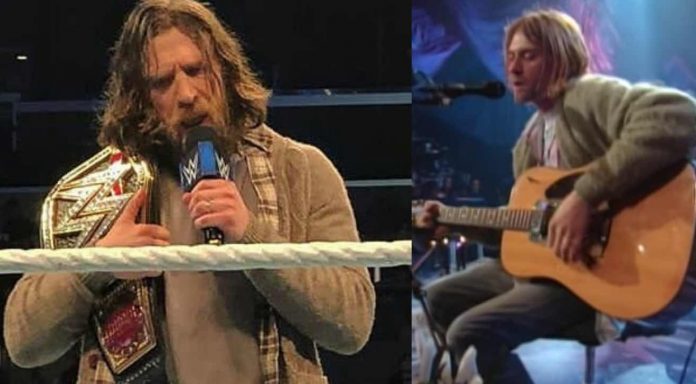 WWE Champion Daniel Bryan recently made a change to his professional wrestling character, becoming a villain last week after being a fan favorite for years. In a WWE Championship match against AJ Styles, he kicked him in the balls to win the title.

Bryan acted like an angry and depressed 90’s Grunge singer as he spoke, a bit like the Raven character from the 1990’s in ECW. Maybe next week he’ll show up in a ‘Zero’ shirt as a homage to NWA wrestling promoter and superfan Billy Corgan? We’ll have to wait and see.

Kurt Cobain and Daniel Bryan are both from Aberdeen, Washington, so the character definitely is a fit. Bryan graduated from Aberdeen High School, where Kurt Cobain, Nirvana bassist Krist Novoselic, Melvins frontman Buzz Osbourne, and Melvins drummer Dale Crover attended years before him.

You can watch Bryan debut the character, and view fan tweet reactions below.

…even if it means creating a nightmare for everyone who stands in his way. #SDLive pic.twitter.com/c0ooheOg6y

Why Daniel Bryan looks like Kurt Cobain if he was 50 pic.twitter.com/BEq45A1Ql7

The New Daniel Bryan looks like Kurt Cobain and Eddie Vedder took a collective shit on him. #SDLive

A friend of mine says Daniel Bryan looks more like Kurt Cobain with that sweater and i agree 😂. Loving his heel gimmick even more. #SDLive

@WWEDanielBryan You're the WWE Champion…why you showing up on Smackdown dressed like Kurt Cobain on MTV Unplugged? (not that it's not a cool look)

he also looks like the lead singer of a 90s grunge band and that's an aesthetic i can get behind https://t.co/yye8l3sLRQ

Heel Daniel Bryan is like a early 90ees Grunge singer.