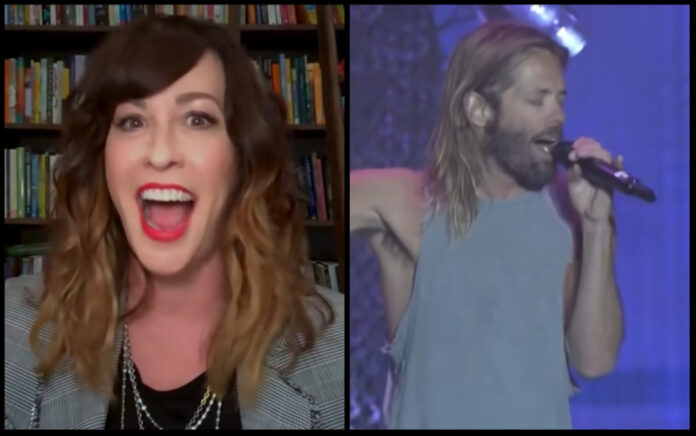 The rock and roll community was reeling and shook when it was announced that legendary Foo Fighters drummer Taylor Hawkins passed away earlier this year. This Foo Fighters bandmate would recently make his first on-stage appearance in months following the Hawkins’ death. Hawkins died at the age of fifty on March 25, 2022. Emergency services were called to the Casa Medina hotel in Bogotá, Colombia, where Hawkins was suffering from chest pain in his hotel room.

Before being a member of the Foo Fighters, Hawkins would spend a considerable amount of time as a member of Alanis Morissette’s backing band. During one of her most recent concerts, it was reported that she would pay tribute to Hawkins as multiple images of his likeness would be shown on screen during a performance of Alanis’ iconic track: ‘Ironic’ with unseen private videos. The images were featured on the screen on stage behind her, which would feature the words “In Memory of Taylor Hawkins” as soon as the song ended. From June 1995 until March 1997, Hawkins was Alanis Morissette’s drummer on the tour supporting Jagged Little Pill and her Can’t Not tour. He appeared in the videos for “You Oughta Know”, “All I Really Want”, and “You Learn”.