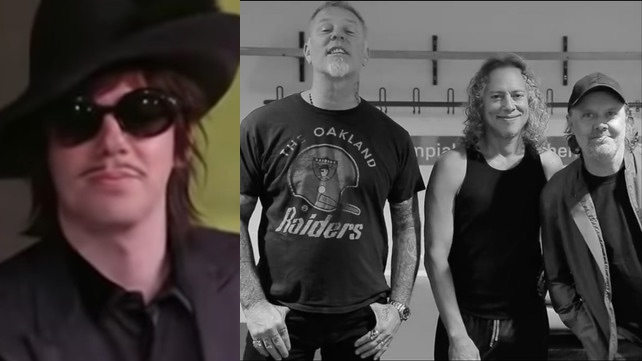 Ghost frontman Tobias Forge was recently asked on Loudwire Nights about the alleged Metallica ticket scheme ripoff, after a phone call of Metallica representative Tony DiCoiccio conspiring with Live Nation to put 88,000 tickets directly in the hands of scalpers before real fans got the chance to buy them. Forge was asked if the same thing could happen to Ghost, with thousands of tickets automatically going to the secondary market. Tobias Forge recently revealed what Gene Simmons did to Ghost.

“Probably. I have no idea. I’ve understood that the world of ticketing is one of science, and this science is practiced by many peddlers outside of our reach, which is a problem. It’s a problem because it tempers with the relationship between the artists and the fans because unfortunately, it can affect a fan very negatively. But also the thoughts and the impression from the fans thinking that it’s the work of the artist, and as far as I know, I’ve never known of an artist that did so intentionally. It’s usually some other service that did it.

Over the years of online sales, there have been many controversies of this sort – and I’m also speaking as a citizen of Sweden, so I’m assuming that we have these issues in every country – but just in Sweden, there was, like, a lot of alternative sort of websites. Before the official tickets were restricted down to three or four per purchase, you had these pages that bought thousands of tickets. I remember, like, 15-20 years ago, it was insane. You could go to a show that was sold out and still, there was, like, 70% there.”

Metallica recently made an emotional The Who cancer announcement. Forge also discussed what Metallica means to him, “My most typical moment is probably when I see them play [when Ghost was opening for Metallica on tour]. Not every night – I don’t see them every night because sometimes we leave or there might be some practical reason. I try to watch the show as often as I can.

You’re standing, listening and they’re playing, you know, one of their classic songs, and you see them play and you hear it’s them, you see that it’s them. That’s my way for me to transform back into a fan who spent many years just watching from a distance and reading everything I could about them and seeing anything that I could about them from their videos or their films.

I guess when you’re bigger, your older professional self sort-of grabs your younger you and you’re both holding hands. That’s definitely a nice moment. I can quite easily evoke those feelings, but they’re the easiest accessible when I see them play.”