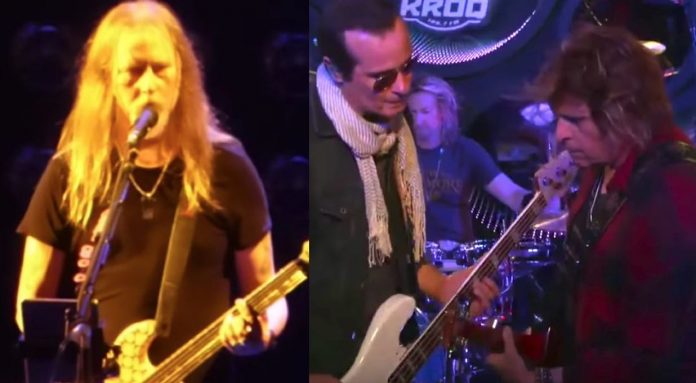 Alice In Chains members William DuVall and Mike Inez were recently interviewed by RocksVerige, and Inez referred to Tool and Stone Temple Pilots as ‘friends’ of Alice In Chains.

How do you find tour life these days?

William: It doesn´t get easier. (laughs)

Mike: But they´re not gonna come to us, so we gotta go to them. (laughs)

William: It´s not getting easier, but there are moments and I have to say today is sort of seeming like one of those moments where you run into these unexpected surprises. You come to a city like Stockholm, that I love, and we´re doing this gig in this amusement park and it´s a setting your just not expecting and the venue has this history I wasn´t expecting. Then there´s combining that unexpected thing with the things you come to know and love, like ”Oh, the people are so nice! And ”Oh, I just had this salmon that melted in my mouth.” and ”Look at these buildings!” and ”Look at these people! Everyone´s beautiful.” That makes the other things about touring so much more bearable.

Mike: Everybody thinks it´s Friday night and a summer night in Paris every night. Usually you´re in the middle of winter in Topeka, Kansas and you´re playing a cold arena and you´ve got the flu and you still have to go and play one and a half hours or whatever. But it´s what we do and we love it. We´re just getting our sealegs now. We did the whole east coast of the US up into Canada playing with our friends Stone Temple Pilots, Tool and doing these really cool shows and a lot of headlining shows. This is our first jaunt into Europe again and this is our third show. We´re going to 17 countries and we end in Tel Aviv, I think. Then we take a break and then do the west coast of the US and then South America is coming up. You can´t think in terms of that, you just have to get out of Sweden with all your fingers and toes. (laughs)