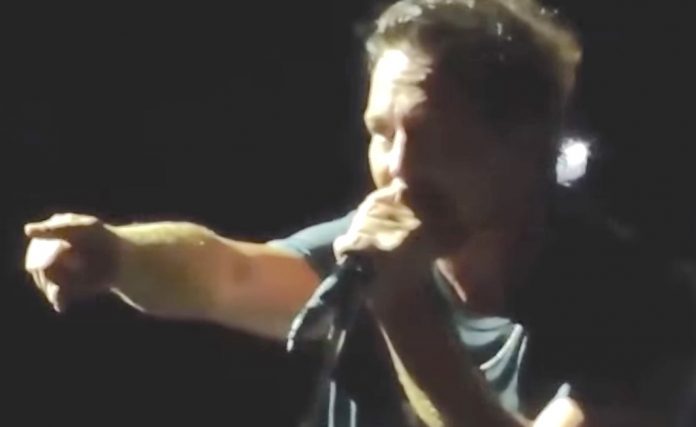 Pearl Jam fans noted in a recent Ten Club forum topic that “Blood” appeared to be very tough on Eddie Vedder’s voice during a recent Fenway Park performance on Boston.

Man, it sure seems like Ed is really struggling with “Blood” these days. Seemed very difficult for him in Boston. Lotta high range and screaming in that song, and it’s one of my favorites of all-time. When I listen to him sing it in Verona, and with the early crunchy voice that Ed had back in the day, “Blood” made me turn inside out…now, not so much. I know he’s getting older.

I always thought a slowed down acoustic version would be cool.

Yeah I hate to say it but Blood is the one song they should just retire. It’s brutal on his voice and Boston was tough to hear imo.

You can hear the strain it puts on his voice. I’m glad I got it a couple times in 2013, but even then it was sounding rough. Where would this song rank as far as being hard to sing for Ed now a days? Seems like it was always hard to sing, but he is getting older now..just the way it goes.

Yea I noticed it too. There were a few songs over the 2 Boston shows where I noticed he struggled with some high notes that were easy a few years ago but like others have said, age and smoking and drinking will do that.

Yup, from the video I saw it looked like there was some struggling. So glad I have been able to get this a few times live years ago when he was on point with it. 2016 Wrigley actually didn’t sound bad at all.

There are several that basically just from a can’t do it properly anymore, time to retire them. Unfortunately Blood is one. I was able to catch this in 1996 and then was super fortunate to catch it 5 times in 03/05 when it was brought back into fairly decent rotation after being played once post 96 through late 2002.