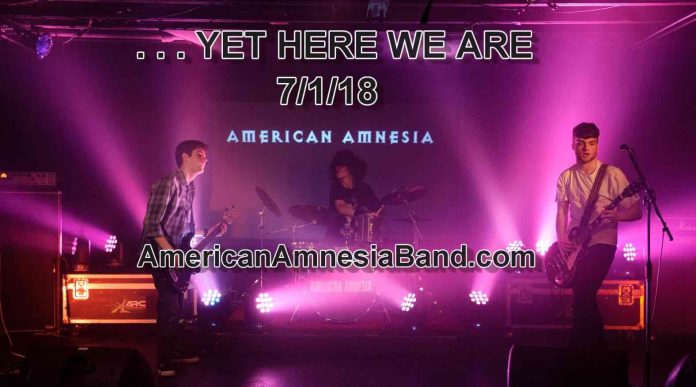 Let me ask you. Have you heard of a band called American Amnesia? Well if you haven’t yet, you better brace yourself. The power-trio, hailing from Connecticut, have arrived and they are armed and dangerous- equipped with the talent, potential and complete monster of a debut album to become rock’s next great band.

…Yet Here We Are contains eleven songs, countless sing-along choruses, killer musicianship and some truly fantastic throwbacks to the heyday of 90’s alternative and grunge. The one-two punch of “Time”  and the punk-infused, bass-heavy “The One” merely set the pace kicking off the album in fine form. “Time” specifically straddles the line between grunge rock and late 90’s rap infused rock with a manic, unexpected quasi-rap section that takes the song from good to great.

The fact that these guys are as young as they are is in itself pretty shocking. Track after track, American Amnesia oozes the poise and confidence of musicians ten years their senior. It’s remarkable the craftsmanship of these tracks is of such high quality. No track proves more than “How Come?” For one, the guitar solo is menacing- combining elements of finesse and shred  The song’s killer groove is led by the clangy, grungy bass in perfect sync with the wicked drumming. The song is- in a word- sick.

“Carrillon” is a close second to best song on the album with its Tool-like bass intro and uneasy feeling. The song works as an atmospheric masterpiece with its Alice In Chains esque vocals seriously leaving you like, “what the hell!?” Fantastic. The bass, the vocals. The whole package. Also, the aptly titled, “Questions in the Dark”. Haunting, chilly and powerful. Enough said.

American Amnesia will be a huge band. Mark my words. You heard it here, folks. Fans of grunge, Metallica and early 00’s Linkin Park will all find something to love here. American Amnesia are prodigies of the art. With ypung rockers like Greta Van Fleet opening the door wide open for more rockers of their age, the future looks very bright for American Amnesia! Don’t me ask you again. Check out American Amnesia and their killer debut album!