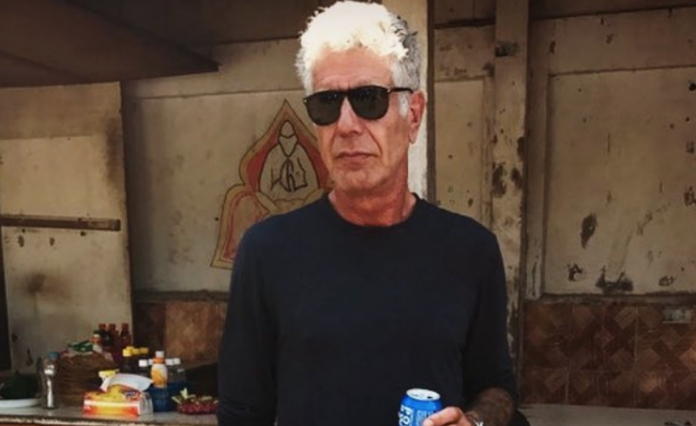 CBS is reporting that shortly before his death, celebrity chef Anthony Bourdain was tucking into sauerkraut and roasted ham in the eastern French town of Colmar, just miles from the village of Kaysersberg where his life ended. Julien Schroeder, the owner and chef of La Petite Venise, said Friday that he served the typical regional meal to Bourdain and Eric Ripert, co-owner of New York’s famed Le Bernardin, while cameras rolled.

Schroeder said a table of Americans didn’t check the menu, instead requesting “what Mr. Bourdain is having.”

Bourdain’s body was discovered in on Friday. He died of an apparent suicide.

Schroeder said Bourdain and Ripert didn’t notice the cameras as they talked food, and he could feel that “it came naturally.”

It’s unclear where Bourdain’s last Instagram photo was taken, but he shared an image of a similar meal last Monday with the caption: “Light lunch. #Alsace.”

Anthony Bourdain‘s mother, Gladys Bourdain, revealed to The Today Show that she last spoke to her son, who she described as “feisty and very talented,” on Mother’s Day.

“There was never any sign something was wrong,” she said.

Gladys also shared that she learned of the tragic death from her younger son, Christopher.

She hoped Anthony would be remembered as “a lover of people of all kinds” who didn’t hide his true self.

“He didn’t disguise anything,” she said. “He was who he was, and it was out there for everyone to see.”