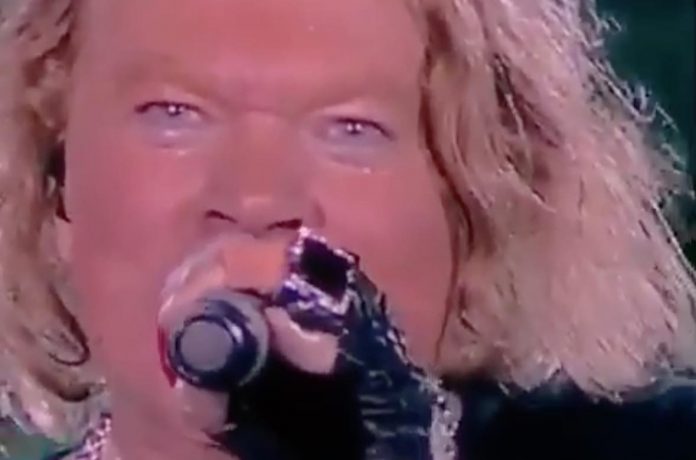 The grandpa in hipster’s clothing is back at it again. This time, the guy who sounds as though someone is standing on his … has resorted to violence – and by hitting a fan who contributes to his paycheck. Talk about ungrateful. Axl, you need to grow up, and grow up fast.

As per The New York Post, an Adelaide (that’s in Australia) woman was left with blood everywhere after a microphone thrown by Guns N’ Roses singer Axl Rose hit her smack dab in the mush.

Rebecca Howe was left with two black eyes and a busted up nose after the incident that occurred at Adelaide Oval on Tuesday night, the Adelaide Advertiser reports.

50+ year old Rose threw his microphone into the audience after the band’s last song, Take Me Down To Paradise City. However what he failed to take into consideration, like a complete numbskull, is that it would make contact with someone in the crowd. Namely, Ms. Howe.

She said:
“I was in Diamond Standing, so it wasn’t even right at the front, and it was the very last song, Take Me Down To Paradise City,” Ms. Howe said.

“He took a bow and then he launched the microphone out to the crowd … and then bang, right on the bridge of my nose.”

While the microphone was caught by another attendee, Ms. Howe was left hyperventilating and in a state of “shock”. I am not surprised.

Axl Rose. What a knucklehead.