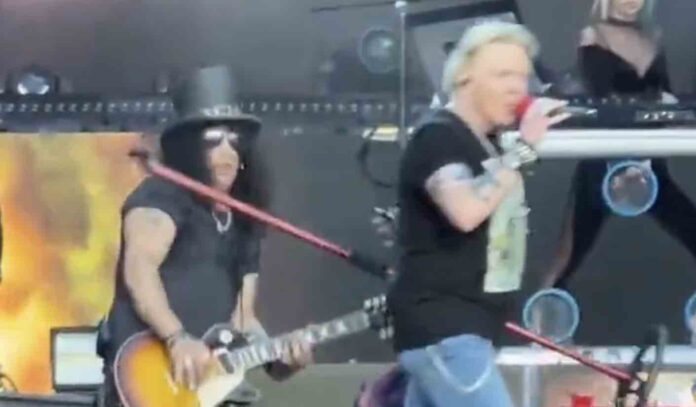 Axl and Slash’s GNR bandmate Duff McKagan was just spotted with some big names at a major show.

The celebrity fandom runs extremely deep. Of course, the rich and famous are just like everyone else on the Earth. They enjoy what they enjoy and dislike what they dislike. Recently, we saw a very famous celebrity head to see the legendary Rolling Stones with his family.

Enter Aquaman himself, Jason Momoa, who looked every inch the family man at the show, brought his daughter Lola, 14, to the Rolling Stones gig in London’s Hyde Park on Sunday. Jason and family were not alone as The actor, 42, was also joined by Guns N Roses bassist Duff McKagan, at the American Express presents BST Hyde Park festival as he watched the iconic band preform a plethora of their classic hits.

Being a musician himself, the movie star beamed a Hollywood smile as he witnessed the legendary band take to the stage. Photos not only showed that Momoa was out and about having a great day with family, but photos also show that he and Duff McKagan were loving up the day as the sun was shining far and wide.

Musically, it’s an evening of massive crowd singalongs, but there are also several emotional moments weaved into the show (after the band’s arrival following video footage of their late drummer Charlie Watts, Jagger dedicates opener ‘Get Off Of My Cloud’, to him, having played together for 60 years; during ‘Sympathy for the Devil’, images of the Ukraine flag and the present war-caused destruction provide a powerful yet somber moment).

Even at the average age of 80, it doesn’t take long to realize that Jagger, Keith Richards and Ronnie Wood remain the ultimate rockstars, commanding the crowd like the seasoned veterans they are.

As the crowds of people make their way out of Hyde Park, one thing’s for sure: rock ‘n’ roll certainly isn’t dead! And The Rolling Stones show no signs of slowing down.