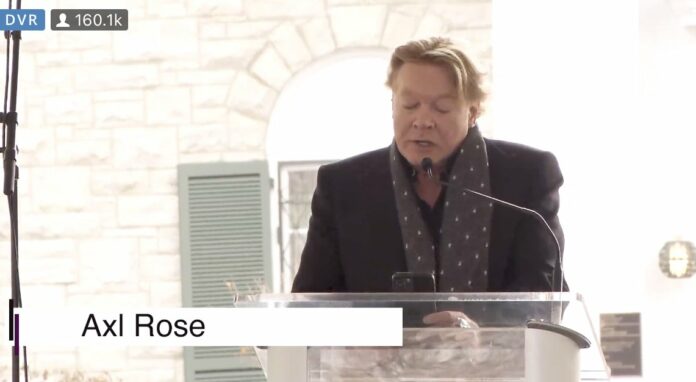 When we think of people who can do it all; one artist that comes to mind is Axl Rose. Tracii Guns proved this as he shared a video of him and Axl Rose playing play the famed Led Zeppelin track, “Rock And Roll” with Sahrk Island at Gazzarri’s in West Hollywood, California in April 1986.

The full video was shot by Marc Canter, an amateur photographer and the owner and general manager of the legendary rock ‘n’ roll hangout Canter’s Deli in Los Angeles, California. Marc has been friends with Slash for over four decades and, has had unlimited access to the formative years of one of the greatest rock bands of all time, Guns N’ Roses.

Now, with Axl covering songs and paying homage, it seems that there is also some rumors that he also steals moves from others.

Via Blabbermouth, Shark Island vocalist Richard Black was asked in an interview with Misplaced Straws if there is any truth to the rumors that Rose “stole” some of his stage moves, including his signature “snake dance”.

Richard Black said: “At first, I avoided it and didn’t want to talk about it. And there was a reason for that because if you look at it from my perspective if I say anything at all, it is perceived as sour grapes. Well, you’re just jealous because that happened and that happened, you know? So I had to keep quiet. Couldn’t really say anything. Now, with so much dirty water under the bridge, it doesn’t really even matter. And frankly, as far as what I see Axl Rose doing is not very attractive at all. It doesn’t look good to me.”

This was shocking and Richard seemed very mad about it.

He continued: “I was a trained modern dancer, you know? I did that, too. I mean, I was a singer, a songwriter, a dancer. I spent a considerable amount of time training and doing all this and thousands of hours on stage. And then here comes a couple of people off the turnip truck and show up in town, and it’s pretty obvious that my kind of stick was appropriated.'”

He then went on to say that Axl actually studied him and his moves.

He went on: “He had a TV going in the living room area and on top of the TV, there was I don’t know, eight or 10 VHS tapes, all marked with Shark Island. He taped some shows verbatim, boom, and one playing as I walked in on TV, no bones about it, nothing was hidden. Well, you know, my heart sank when I saw that. Because I already knew at that time that Guns N’ Roses were getting down with David Geffen and that whole thing. And I knew that the person with the biggest mouthpiece is going to be able to claim whatever, so what can I do? You know, what can I do?”