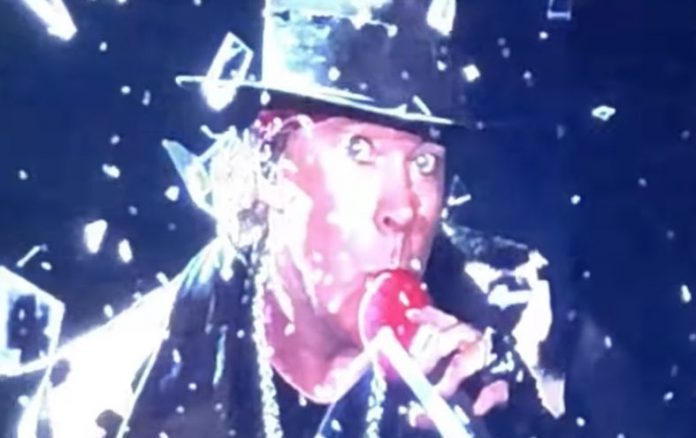 I asked him if the new GnR album would sound more like a classic GnR album, something closer to a Chinese Democracy sound, or if it’s even evolved into a more modern sound than that. Fortus said the sound will be even different and more evolved than Chinese Democracy.

Fortus mentioned that with the band’s in-ear monitors, Axl has a channel that the audience hears, and a channel where he can communicate to the band. Sometimes while band members are performing solos, Axl will be telling jokes to them.

The Guns N’ Roses fan podcast Appetite for Distortion recently interviewed former MTV host Tom Green about his Guns N’ Roses fandom. “The Tom Green Show” meets “The AFD Show.” The hilarious comedian updates us on his new album, where his musical influences come from, and his experience seeing GNR with Bubbles from the Trailer Park Boys.

Plus Tom wants to make a funny song with Sebastian Bach, is trying to be friends with Drake, embraces “Daddy would you like some sausage?” and much more! Please follow and subscribe!

The band is at its biggest point in decades, and only time will tell if Rose and McKagan’s wokeness will spill over into new GN’R music. The group has lined up several festival headlining slots for the fall and McKagan won’t rule out the possibility of a new album. “There’s things happening, some of it positive,” he says. “Everything is moving in a great direction. So I am really looking forward to phase two of this thing. I’d hate to say something in the press to fuck it up, so I just have to say, ‘It’s going great.’ In true Guns N’ Roses fashion, people are in the dark, and that’s kind of cool. It’ll happen when it happens.”

For now, McKagan is touring solo with a little help from Shooter Jennings. At a recent New York City gig, Jennings’ band played about an hour’s worth of country music, capped with a David Bowie cover, after which McKagan joined them. Dressed fully in black, like a skinny Johnny Cash, McKagan opened with Guns N’ Roses’ Use Your Illusion deep cut “You Ain’t the First” and played the entirety of Tenderness with some added fiddle, steel guitar and organ. Even though McKagan’s music was a little more country than what the crowd of middle-aged GN’R fans would likely see on a Monday night, the audience cheered on the musicianship.