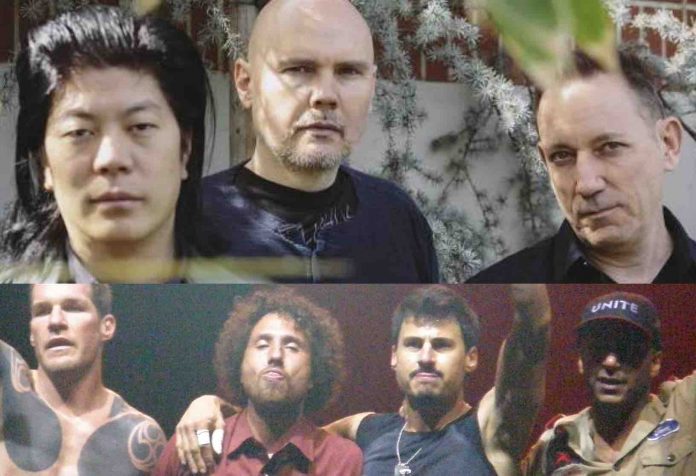 A fan asked Corgan, “Your thoughts on the My Chemical Romance and Rage Against The Machine reunions?” Corgan responded, “Happy for both groups. Hope they record new songs.”

Tom Morello posted yesterday, “Want to attend the TOM MORELLO GUITAR REVOLUTION seminar but don’t need hotel accommodations? Commuter Packages are now available at a discount rate for those of you who live nearby or have another place to stay. And you still get all FOUR DAYS of RADICAL GUITAR MADNESS with me, @NunoBettencourtOfficial, @John5Official, @OfficialWayneKramer, @Vurnt22, @BibiMcGill and @BillyHowerdel – head over to tommorellosguitarrevolution.com for more info. Link in bio.”

Rage Against The Machine’s reunion tour was banned by a big name. Morello also said, “Throughout the history of music there have been people crucial in championing, fighting for, believing in, pushing hard for, inspiring, and relentlessly LOVING ROCK N ROLL in a way that expands, preserves & celebrates the genre. @allihagendorf who flys the flag like no other at Spotify (and everywhere) with a metal heart & a rock n roll soul tops the fucking list and is a kick ass treasure. HAPPY BIRTHDAY and THANKYOU and CONGRATS on your soon to be ROCK BABY. #HornsUp.”

Billy Corgan wrote a few days ago, “As can happen, feel like this mini-documentary has gotten lost in translation of how social media works. This is a clip from 30 Days: Revisited, featuring new songs from COTILLIONS and unseen footage from the 30 Days trip. It’s only about 15 minutes long, so I hope you give it a chance and are rewarded in return. Thank you! Record is out NOVEMBER 22nd.” Billy Corgan recently dropped a new Soundgarden album bombshell.