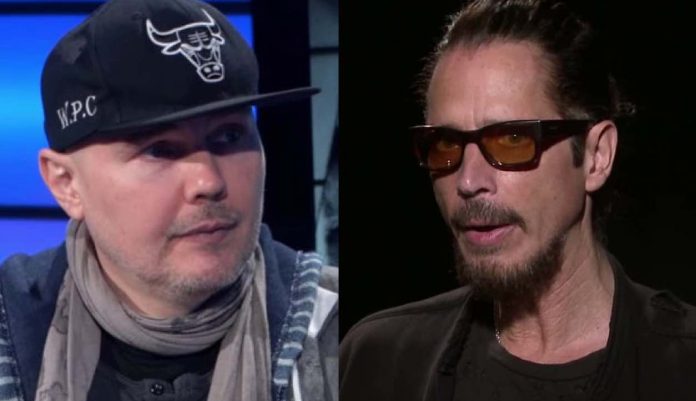 Smashing Pumpkins frontman Billy Corgan has revealed that he would like to see Soundgarden finish their new album, the followup to 2012’s King Animal, with Chris Cornell’s demo vocals he recorded before his May 2017 death. Kim Thayil recently claimed that Chris Cornell representatives are blocking the band from accessing the files they need to complete the album.

A fan asked Corgan, “Thoughts on Soundgarden finishing their last album with Chris’ demoed vocals?” Corgan responded, “Chris could sing like no one else. I’m sure it’s worth it on every level.” Corgan was critical of Soundgarden’s reunion in the early 2010’s, saying they were ‘out there to have one more round at the til.’ Corgan has been very positive though about Soundgarden and Chris Cornell since Cornell’s May 2017 death.

Kim Thayil recently told Music Radar how his guitar playing has changed over the years. “I had just turned 24, or might have been 23 when the band started. I mean, I’m not the same person I was when I was 23; I have a different attitude towards my relationships, and a different attitude towards the instrument. And that would include the relationship I had with the guys in the band.

When you have great players, like Ben and Chris and Matt, they certainly create an environment that would encourage my ability and vice-versa for the other players. And I think everyone got better; I think we challenged each other – the kind of songs we’d write would play to the strengths of other players, and occasionally we’d do something that was a little bit out of the element of a person’s particular style, and that would necessitate that they adjust and grow and accommodate the material. So I think all of us certainly grew, but I definitely recognise that with myself.” Pearl Jam frontman Eddie Vedder discussed the deaths of Chris Cornell and Kurt Cobain with a big name last week.