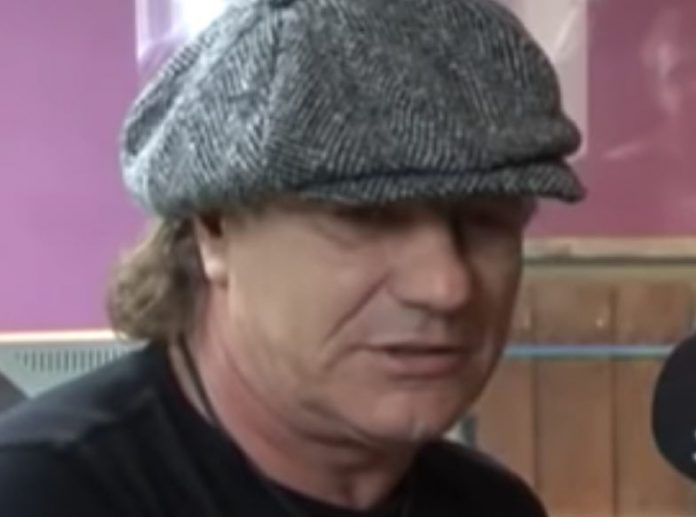 AC/DC singer Brian Johnson departed the band in 2016 and was replaced by Axl Rose, though he is rumored to now be back, with Cliff Williams’ daughter recently responding to AC/DC 2020 tour rumors. During a recent interview with Appetite for Distortion, Comedian and former SNL cast member Jim Breuer tells the story of how in 2016, on a podcast Breuer said a lot about hanging out with Brian Johnson after AC/DC asked him to leave due to his hearing issues, and Johnson wasn’t too pleased with him for discussing private conversations.

Alternative Nation transcribed Breuer’s comments, where he revealed verbatim what Johnson told him about his departure and how his public comments may have damaged a reunion. Breuer did say though that reports of a reunion now happening make him feel a lot better. A stunning new photo of Brian Johnson surfaced earlier this week.

Breuer: This is how I woke up and it was: “Brian Kicked to the Curb says Comedian Jim Breuer”, and “We may have the real reasons” – blah blah blah. That was a terrible position to put him in and whether it’s true, not true or fabricated doesn’t matter at the end of the day and I feel like a guy like Brian Johnson who is so open, so honest, so giving, I feel like I did him a major wrong by doing that to him. Out of all my life, that’s my biggest regret.

Brando: Did Brian understand that at all?

Breuer: I’m sure he did and we talked but I can tell. It’s a trust factor. Now, I can’t share certain things with you and that was a huge learning thing with me and I really regret that to this day.

Brando: Was it so much what you had said or was it the headlines that had come out?

Breuer: Well, you know, the way headlines go is people just see the headlines and then they read. So the headlines were: “Brian Kicked to the Curb, says Jim Breuer” or “Brian Fired”. Whatever the headlines read it was “Jim Breuer” and then it would say: “Jim said After Spending Time With” It was just well manipulated enough that it didn’t make him look bad but the conversation was like: “Jim, this is bar talk.” It’s like me talking to you [Brando] and going: “Hey I just wanna tell you something,” and now it’s all over the world. Like dude, I’m just venting to you right now. This is not for the world to hear and this is while we are still going through things. It’s one thing to stick up for someone, it’s not your job unless it’s a call to arms.

Breuer would continue later on in the interview:

Breuer: I gotta tell ya, the best thing that helped me was the fact that he’s back and I can sleep a lot better at night. I can remember the words from him which now I can say. I wasn’t gonna say it because I feared for my life, and I’m being dead honest because there are crazy fans out there but I remember him saying to me: “Well Jim, this may have screwed up any chance I would have to get back with them.”

AC/DC have been teasing activity on social media, with a surprising video being uploaded recently.