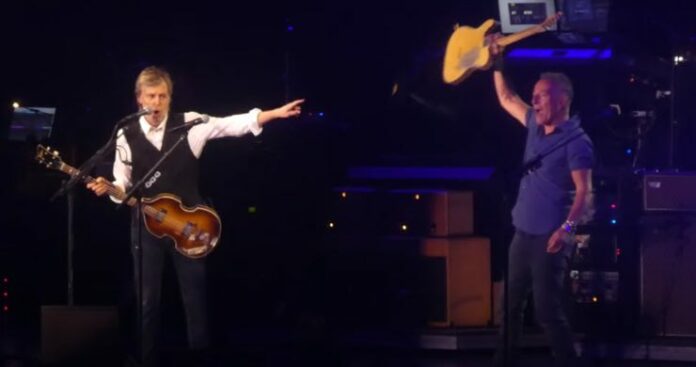 The Beatles co-founder and rock and roll living legend Paul McCartney, who just talked about this Beatles ripoff, recently turned eighty years old. In doing this, the man nicknamed Macca also had a concert as part of an ongoing series of 2022 tour dates with this particular one being held at Metlife Stadium in East Rutherford, New Jersey. In a complete surprise, McCartney would bring out a special guest, New Jersey resident, ‘The Boss’ Bruce Springsteen.

“We got a special surprise for you,” McCartney said. “A friend of mine, he’s a local boy. I think you guessed it! I said you got to come and sing with us!”

Springsteen would trade guitar licks with McCartney before coming back later in the show to close the concert with ‘The End’. However, in the moment he would state ‘Here’s to 80 more years of glory days!” Indicating that he doesn’t see McCartney retiring anytime soon.

In other news concerning Paul McCartney and The Beatles, according to Far Out Magazine, McCartney would once state that one of The Beatles’ most ambitious songs, Rocky Raccoon was a parody of popular wild west media and culture.

According to the outlet, McCartney would state: “‘Rocky Raccoon’ is quirky, very me. I like talking blues so I started off like that, then I did my tongue-in-cheek parody of a western and threw in some amusing lines. I just tried to keep it amusing, really; it’s me writing a play, a little one-act play giving them most of the dialogue.”

“Rocky Raccoon is the main character, then there’s the girl whose real name was Magill, who called herself Lil, but she was known as Nancy,” he said. “There are some names I use to amuse, Vera, Chuck, and Dave or Nancy and Lil, and there are some I mean to be serious, like Eleanor Rigby, which are a little harder because they have to not be joke names. In this case, Rocky Raccoon is some bloke in a raccoon hat, like Davy Crockett.”