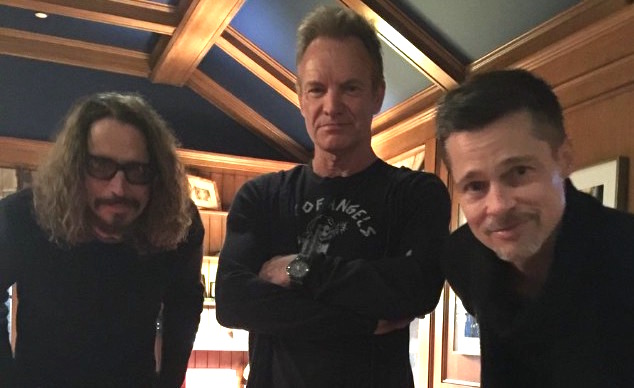 Recently, Toni Karayiannis – the mother in law to Chris Cornell, took to Instagram to post up a photo of Chris Cornell with his children, including Toni Cornell, as well as a special guest appearance from one of the very famous friend’s of Chris’, Brad Pitt.

Brad Pitt and Chris Cornell were very close friends in life and Brad Pitt stayed friends with Cornell all throughout. Chris Cornell, in the past, had spoken about Brad Pitt as well as speaking highly about him as well as the two were both in each other’s immediate friend group.

Another friend of Cornell’s was Timbaland. His collaboration with Timbaland was a success and emerged as the highest-charting of his career — although it was met with disdain by the music press. In all likelihood, Cornell could foresee the reaction to the departure in his sound, and perhaps, he even enjoyed ruffling feathers.

Not long after the duo released the album, Trent Reznor regretfully took to Twitter and harshly wrote: “You know that feeling you get when somebody embarrasses themselves so badly YOU feel uncomfortable? Heard Chris Cornell’s record? Jesus.”

After Cornell’s death, Reznor looked back on the incident during an interview with Rolling Stone and thankfully revealed that the Soundgarden frontman didn’t hold a grudge, which paints a picture of him as a man. Explaining his initial comment, Reznor said: “Seeing Chris do that record felt like a blow to me. I thought, ‘He’s above that, man. He’s one of the ten best vocalists of our time.’”

Reznor revealed that he “immediately regretted” posting the tweet and said he even sent Cornell a letter apologizing for his actions, which he duly accepted. Reznor said: “He was very cool and generous about it – ‘It’s the past, f*ck it. Let’s go on’. The Chris I met on that tour was a gentleman that completely had his sh*t together.”