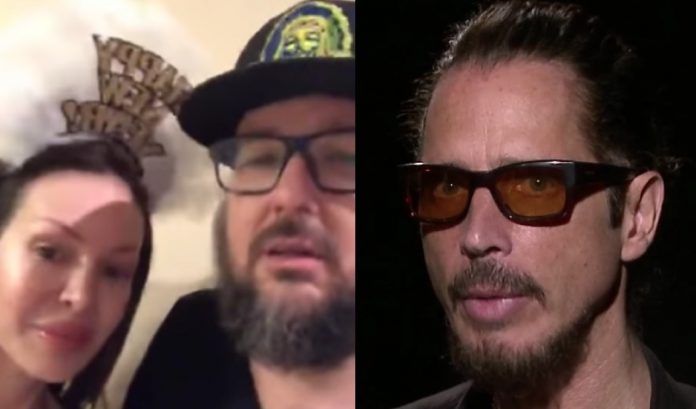 Korn members James “Munky” Shaffer and Brian “Head” Welch have paid tribute to their bandmate Jonathan Davis’s estranged wife Devon following her death after a battle with drug addiction. An official cause of death has not released, but former Korn and Chris Cornell manager Jeff Kwatinetz tweeted that she overdosed.

Munky wrote: “Our prayers are with the Davis family at this difficult time. Jonathan, your wife will no longer suffer all of the demons. She is now with God. May she rest in peace and may you trust that me, your band, our families are here for you and will together help you and your boys to heal. We love you so much.” He signed the message with “The Shaffer family.”

Head shared an image which read: “Love, prayers for my bro, my homie Jonathan Davis and his family.” He later shared another picture of a heart shattering into pieces and captioned it with a broken heart emoji.

Chris Cornell and Korn’s former manager Jeff Kwatinetz wrote on Twitter: “My thoughts and prayers go out to one of my closest friends and a truly great human who I love, Jonathan Davis, on the death of his wife from an OD. I pray for his kids and family. I knew Deven and no one deserves to struggle w addiction and die. Too often, too much!” Kwatinetz was Chris Cornell’s best man at his 2004 wedding to his wife Vicky.

In 2016, Jonathan, 47, filed for divorce from Deven and on Friday filed for a domestic violence restraining order, TMZ reports. Jonathan was reportedly granted a temporary order, which prohibited Deven from visiting their two children or having any contact with the family’s dog. In his declaration, Jonathan claimed Deven has struggled with drug abuse for over 20 years.