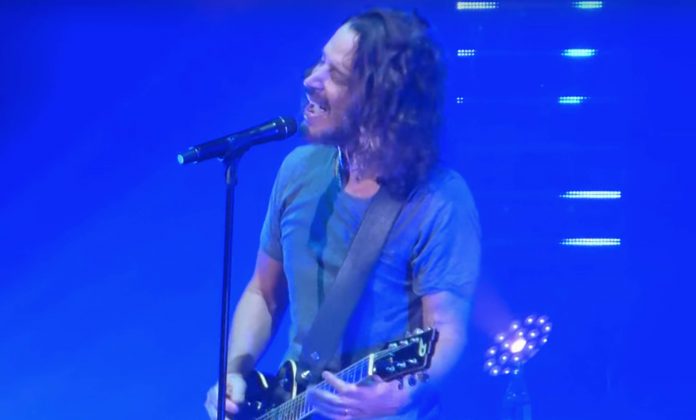 Soundgarden’s Chris Cornell, whose tragic death in 2017 was ruled a suicide by hanging. Vicky Cornell recently spoke about the circumstances surrounding the death. She suggested that the topic of suicide needs to be discussed more.

During a conversation with SiriusXM’s Gayle King last Thursday, September 15, Vicky said that her late husband’s decision to take his own life was utterly unexpected, likening the tragedy to a “Tsunami. This was nothing. This was not on the radar.”

Over the past five years, Vicky strove to come to terms with her loss, and noted how talking about Chris has been instrumental to the process – talking as a way of bringing the difficult conversation about suicide to light, and talking with her children about their father daily in order “to keep Chris alive in our home.:

According to Vicky, her late husband had never had suicidal ideation before:

“Chris did not suffer suicidal ideation, and Chris was not even depressed. Chris was in recovery, and he had been on benzos [benzodiazepine].  But again, looking back, nothing even at that very moment felt like – it was impossible. It came from nowhere.”

It has been reported that the original toxicology report found several different prescription drugs in his systems, their influence was dismissed as a potential contributor to Chris Cornell’s suicide.

Vicky believes how they must have had an effect on her late husband, as she recalls their phone conversation, shortly after Soundgarden’s performance at Detroit Fox Theatre from earlier that night:

“I do know the cause, because I was on the phone with Chris. And he was in some sort of delirium the same night. He called me after the show, and I could just hear he wasn’t right. He sounded like he was high, and he was confused, his speech was slurred and there was just something that was extremely off and evidently off. And then just, I don’t know, thirty minutes later that was it.”

As someone who lost a loved one to suicide, Vicky says that understanding the circumstances which led to the loss is a topic that shouldn’t be avoided:

“I think that our loved ones, especially when it comes to suicide, it can’t just be ‘They died by suicide. They look their own life.’ Okay, but why? What happened? How can we prevent it? And I believe that’s a really big part of prevention and helping us heal.”