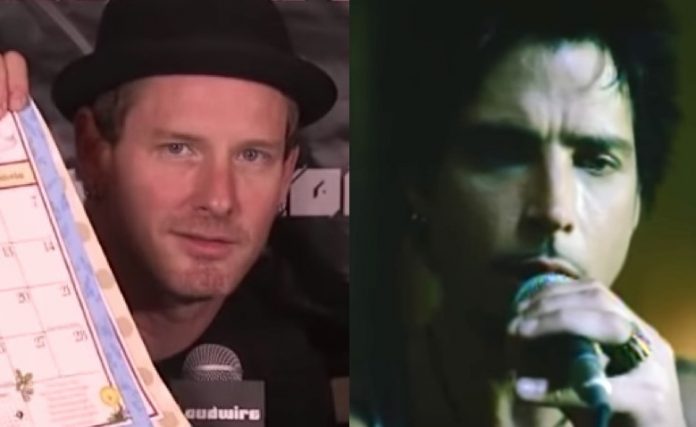 Slipknot frontman Corey Taylor, the estate of late Soundgarden frontman Chris Cornell, and other big names have donated items to an auction for a charity that is working to expose child predators. Howard Stern recently revealed a stunning final Chris Cornell video.

“I’m so proud to be part of the first ever @innocentlivesfoundation Rock and Roll auction. ILF is a non-profit working to expose child predators and bring them to justice. Click the link in my bio to bid on my personal guitar I wrote my entire upcoming solo album on, signed by @slipknot, to benefit ILF.”

Taylor is selling a signed Slipknot guitar, with a current bid at $1,751. The description states, “Corey Taylor from Slipknot is about to release his first solo album. On his tour bus was this beautiful guitar that he used to write the whole album. He autographed it, had the whole band autograph it then he send it to us for this auction. Any Slipknot fan would see this as a must have for their collection. It would ship in the case Corey donated and a secure guitar box.”

Corey Taylor recently shared a picture of an unmasked Slipknot bandmate. A photo of Chris Cornell is currently at a $550 bid. The auction states, “Award winning photographer Andrew Stuart’s beautiful black & white of Chris Cornell. This is #21 out of 25 in the world and has been released by the Cornell Estate for the ILF auction. Autographed by Andrew Stuart. Will ship in a secure photo container. Shipping will be calculated upon the completion of the auction. No other fees will be added.”

Members of No Doubt, Foo Fighters, and Black Label Society also donated items. InnocentLivesFoundation.org, where you can bid on the auction, write about their mission, “The Innocent Lives Foundation started with the desire to make a positive impact on behalf of children. Our Founder, Chris Hadnagy, in connection with work that he was doing for his company Social-Engineer, LLC, had the opportunity to work on a few cases that helped track and capture predators who trafficked and exploited children. Some of these cases hit him very hard. He saw the impact that these crimes had on innocent people, and he wanted to do something about it.

Chris is a leader in the information security community, and this community has nearly limitless talents and abilities to locate people anywhere they hide. Chris knew with additional resources he could help many more victims. In addition to his resources in the technology and social engineering industries, he assembled a group that includes Neil Fallon, lead singer of the rock band Clutch and Tim Maloney, a lawyer experienced in forming and representing non-profits and technology based businesses.

What they all had in common was a desire to use their unique talents and networks to address these problems and prevent crimes against future victims.”