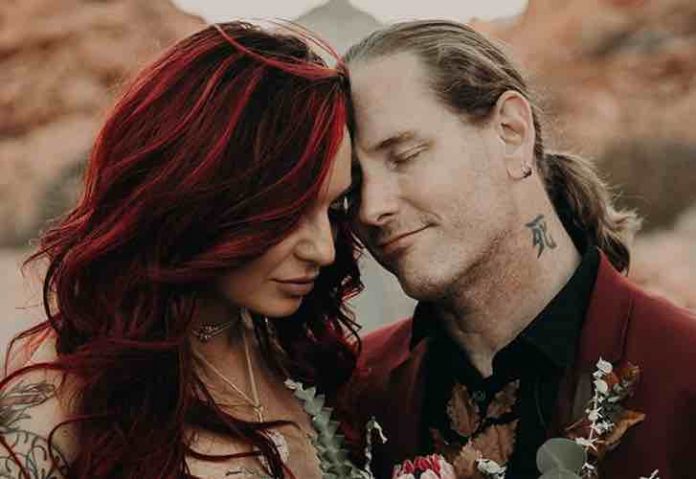 Slipknot singer Corey Taylor‘s wife Alicia performs with The Cherry Bombs, and it was recently announced that they will play at the Sonic Temple festival in Columbus, Ohio in May, but they were referred to as ‘Cherry Bomb’ on the poster, a very sad mistake.

Corey Taylor made a Slipknot ‘ending’ claim a couple of days ago. Willowsworldtour commented on Instagram, “Aren’t you guys cherry bombs like plural not “cherry bomb” I remember being a dj and having my entire name shortened to dj Steve I was like damm one day I won’t be on the small print lol.”

Alicia responded, “You are correct. We’ll take what we can.” Nickbweird wrote, “I like how it says ‘Cherry Bomb.’ Just one of you.” Alicia quipped back, “A one woman show doing all the things at once in high heels for 30-45 minutes straight. One track. One woman.”

Slipknot revealed their new “Nero Forte” music video earlier this week, and Kilo_Gint wrote on Reddit, “Unpopular opinion on the new Nero Forte Official Video. Now this might sound harsh or dumb to others, but the new video of Nero Forte was kinda boring, the effects, colors, dancing, every single of them was, meh. Except the part where they were all together, that was a cool part.”

VampiricCheesecake commented, “Yeah it was kind of underwhelming but I wasn’t expecting anything too grand, considering the behind the scenes footage that was shown last month. I liked the colorful lights and the direction was good but overall it didn’t blow me away. However, that shot of all of them together was by far the best part. Loved that.” Corey Taylor revealed a stunning Ozzy Osbourne demand a couple of weeks ago.