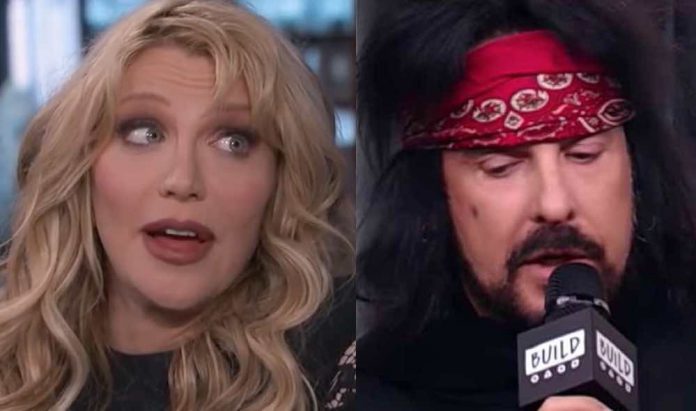 Motley Crue’s ‘The Dirt’ has been a massive hit on Netflix since its release in March. The film touches on the Grunge movement a bit, with a Pearl Jam poster visible, and Vince Neil looking like Kurt Cobain. Dave Grohl recently weighed in with his surprising take on the film. Courtney Love accused ‘The Dirt’ of being ‘stupid and vile about women’ in a new Interview magazine interview.

“I recently had three girlfriends over and we sat on my epic Majorelle art nouveau bed. My Rolfer came over to do his thing. We don’t call it massage—they get so pissed off, the Rolfers do. He does deep tissue bodywork on ladies. We watched the dumbest Netflix film ever called The Dirt [a biopic about the band Mötley Crüe]. It’s so stupid and vile about women, and just fucking dumb.

It was super fun to groan together. We had jasmine tea. We all got our bodies worked on and watched this white rapper named Machine Gun Kelly, and we just made jokes. I was like, ‘When’s Ozzy [Osbourne] gonna snort the ant?’ Then, within seconds, he snorted the ant. Then the Nikki Sixx character was like, ‘I have a new girlfriend. She’s sweet. She’s wonderful.’ I was like, ‘And her name is heroin.’ Two seconds later: ‘Her name is heroin.’ I was killing it.”

Nikki Sixx revealed in a recent interview if he disliked Pearl Jam and the Grunge era for ending Motley Crue’s era of rock and roll.

In a new Heavy interview, John Corabi hit back at claims that he was hired to replace Vince Neil in Motley Crue because Nikki Sixx wanted to hop on the Grunge bandwagon with Nirvana, Pearl Jam, Soundgarden, Stone Temple Pilots, and Alice In Chains. Blabbermouth transcribed his comments.

On why he thinks he became the singer:

John: “Some people have these conspiracy theories that Nikki knew that the grunge era was coming in and knew that Motley wasn’t going to whatever, so they found a guy that might be able to get them through that. Whatever. We were just sitting in a room and jamming and coming up with stuff that we thought was awesome. It was really no rhyme or reason — there was no plan like, ‘Hey, we need to do a heavier record.’ I think it just kind of happened, because once I picked up a guitar, the sound got thicker, and then my background is really The Beatles for melody. I love their songwriting, but in all honesty, I was always a [Led] Zeppelin guy, and Zeppelin was big riff rock. That’s what the Motley record is. To me, our Motley record was a cross between Zeppelin, [Black] Sabbath and Beatles acoustic whatever. We didn’t think about it — we just played, jammed, had fun.”

On many considering his Motley Crue record to be the band’s best:

John: “I know for a lot of the fans, they thought it was a great record. I know for some fans, they were just like, ‘Nope.’ Still to this day, there are some fans who are like, ‘I don’t want to listen to it. I’m not even going to bother with it. It didn’t have Vince [Neil] on it, so it’s not a Motley record.’ That’s the beauty of choice. It doesn’t offend me. To each his own, but at the end of the day, I’m very proud of the record that I did with the guys. I had a great time doing it, and to some degree – not solely because of the Motley thing — but I think being in Motley has helped the longevity of my career a bit. I’m always going to be the asterisk — the other guy. [But] life is good, man.”