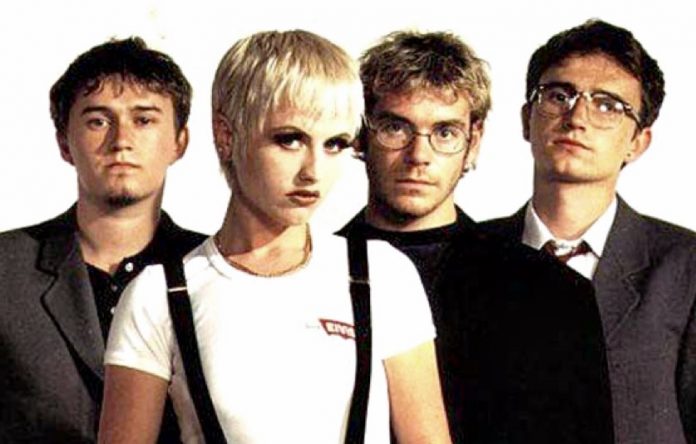 The Cranberries’ brand of alternative rock usually included a lot of melody and a lot of pop, but yes, when they wanted to, The Cranberries could rock hard. “Zombie” pushed the door open to a tougher, more aggressive, punchy style that they used a number of times.   While their band sound overall remained a mix of cascading guitars, graceful vocals, bittersweet tones and a slick, soothing and passionate feel through their catalog, they still could still hammer home some rough riffing, fierce drumming and commanding vocals from Dolores O’Riordan. “Zombie”’s massive success allowed us to taste the sour bitterness of The Cranberries. The song was just the first of a row of hard alt. rock tracks that marched in with enough muscle to rock out.

With the passing of Dolores O’Riordan last week, it may be painful for some fans to hear their music, and for some fans, it can be therapeutic. One way is scooping up The Cranberries’ top ten hardest rocking tracks of their career; times when they let loose, away from their more measured, elegant light rock tracks, and towards an heavy, aggressive and brash style.

An adrenaline-fueled performance from Dolores O’ Riordan, Noel Hogan, Mike Hogan and Fergie Lawler, the band come together excellently here despite the complex rhythms that accompany this song. O’Riordan’s voice soars and growls while Lawler’s Energizer bunny drumming never lets up its intensity.

9. I Really Hope (Wake Up and Smell the Coffee)

One may think this is an soft horn laden pop song from the opening, but it soon steps on the gas and speeds with aggression. Inspired vocals from O’Riordan and a tight band performance show they could bring muscle when needed.

The sound matches the title on one of the Cranberries spookier tracks. O’Riordan sounds haunted by her homeland and the chorus’s guitar crunch and verse’s yearning sorrowful guitar notes reveal a dark, cold and cloudy country.

Insistent guitar riffs layer the title track of their 2001 album in a way that it feels mean but not aggressive. It’s laid back rhythm clashes some with the intense Dolores vocals but the melody has hooks and they sink in the more they’re heard.

With syncopated guitars and bass, the band come together for a fast but brief track that tells us of the dangers of drugs. While the horns undercut the heaviness, it’s still one of drummer Fergie Lawler’s best performances, as he ups the intensity with speedy but precise drumming that ends up being the most vital part of the track.

Amidst all the popular nu-metal of the time, The Cranberries released two new tunes for their 2002 greatest hits album and both work well within a more muscular style that tries to compete with the heavier bands. The rough riffs play the tough role in a song about New York overcoming the 9/11 terrorist attack, feeling as gritty and tough as the city itself.

Despite the massive success of “Zombie”, The Cranberries were still known as one of the poppier alt. rock tracks but now they had the potential to get heavy.  The enormous, dark sound of “Hollywood” was a surprise anyway when it first released because it really bashes you hard as the leadoff song of To the Faithful Departed. While lyrically, it’s just another anti-glamor message, sonically, it’s the 2nd heaviest thing they ever did. It’s the type of song that feels heavy at first but on repeated listens, each section reveals its hooks, gaining strength every time a riff or vocalization comes around again.

The band had done heartbreak dozens of times by 1999, but this one was different.   It’s like Dolores O’Riordan added up all the pent up anger from every other song and unleashed perhaps her greatest vocal performance, annihilating her enemies, partners, anyone in her past, anyone in her path. The guitars are relentless with driving blades of distortion that can pierce your ears they’re so pointedly sharp and vicious. You can feel O’Riordan ripping the heart out of your chest with her intense vocals. The adrenaline rush tempo provided by drummer Fergal Lawler and the guitars by O’Riordan and Noel Hogan shred out propulsive riffs against each other as it builds and builds throughout. “Promises” is just incredible and it should have had almost as much success as our #1.

With sheets of sheer terrorizing distortion and agonizing cries and screams of O’Riordan, The Cranberries brought all the bombed out buildings, the torn apart families, the horror, the grief and the paranoia of war into our heads. Like a general, Dolores’ shouting ‘zombie’ over the wreckage creates a visualization of another war casualty each time she yells it out.   The bombastic monstrous sound of the chorus is fleshed out by the sympathetic heartache of each disturbing verse set up by an excellent, eerie and painful guitar riff. With its production and arrangement just right, and bassist Mike Hogan’s foreboding bass rumblings, the huge sound feels like an arena shaking and crumbling into dust within an earthquake. Immensely popular as an all time great alternative rock track, it added another 25 million views on YouTube in the last week since this treasure O’Riordan passed and is currently over 675 million views total. With its deep meaning and tragic feel, “Zombie” is best Cranberries hard rock track.