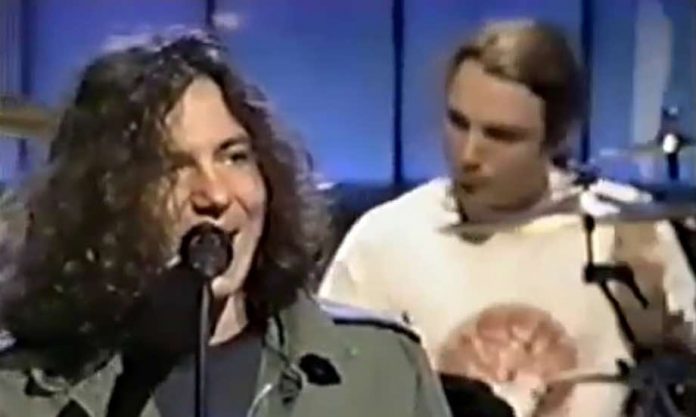 The former Pearl Jam drummer Dave Abbruzzese has been considered by many Pearl Jam fans to be the best drummer that Pearl Jam has had, or at least they will acknowledge that Dave was around for the most influential times of the band.

Dave Abbruzzese is very active on social media and it does seem to actually be him, rather than anyone actually running his accounts for him. He recently shared a video clip that saw the Quarantine Jam of the “Powerman” originally by The Kinks. The jamming session features Bernard Fowler, Eric Schenkman, Benny Goodman, Carmine Rojas, Marcus Nand, Martina Rover, Shani Kimelman, and of course David Abbruzzese.

Dave wrote to Alternative Nation owner Brett Buchanan, ““Heya, Brett! I thought you might enjoy this. Me joined by my friends (various players from David Bowie, Rod Stewart, The Rolling Stones, Spin Doctors, etc.) Having fun with an old song by The Kinks! I’ve got some more ‘Quarantine jams’ coming soon! Happy holidays to you!”

You can check out the YouTube video clip posted by Dave Abbruzzese below:

Recently, Dave also posted up a video of himself in the 1990’s with Eddie Vedder as they did a rendition of the song, ‘Angel’. This song isn’t very well known unless one follows Pearl Jam pretty loyally, like many do on this website.

The song was written by Eddie and Dave both. In the video posted up on Dave’s Facebook, you can see him playing the guitar while Eddie Vedder is doing a great vocal performance to really set things off. While Dave and Eddie may have had some bad times between each other which ultimately lead to the downfall of Dave being their drummer, you can tell that there was still love there. Dave wrote, “Yes, I remember what could have been…”