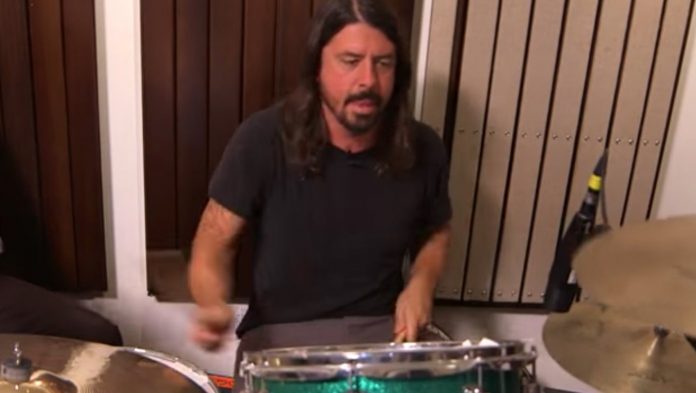 Dave Grohl has given a name to his collaboration with his daughters, calling it The Grohlettes in a new tweet where he continues his back and forth with young drummer Nandi Bushell, who challenged him to a drum off last month.

Grohl tweeted today, “Ok @Nandi_Bushell….Round 2! Every superhero needs a theme song. Here’s one for you! Mad props to The Grohlettes for the background vocals.”

In the video, Grohl introduces it by stating that he intends on writing and performing an impromptu song. Alternative Nation transcribed his comments.

Grohl has performed unorthodox songs in an online setting before, debuting his solo track “Play” a couple of years ago. Grohl’s daughter Violet has performed with Foo Fighters in the past, and Dave and Violet have covered Adele at charity shows.

Foo Fighters were set to tour this year to celebrate their 25th anniversary, with a new album ready to go as well, but both were pushed back due to the worldwide pandemic, with the Foos and many other prominent rock bands being forced to go on hiatus. Dave Grohl’s beach mansion he is spending quarantine in was also just revealed.

Ok @Nandi_Bushell….Round 2! Every superhero needs a theme song. Here’s one for you! Mad props to The Grohlettes for the background vocals. pic.twitter.com/js9xBasbpw