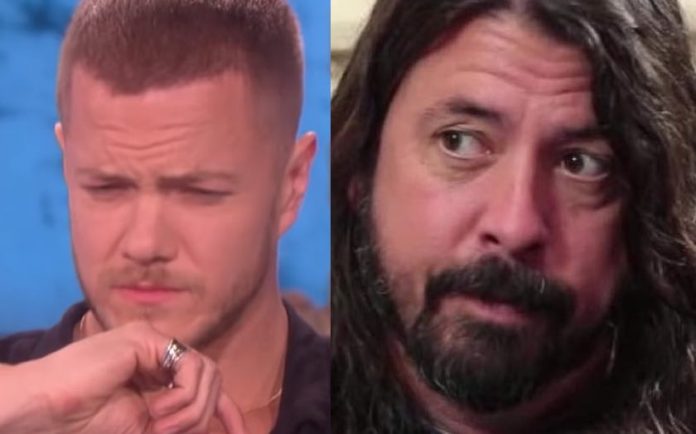 Imagine Dragons frontman Dan Reynolds is feuding with some of the biggest names in rock, but he has at least one friend in Foo Fighters frontman Dave Grohl, who appeared happy to be with him in a recently surfaced Twitter photo.

Reynolds wrote on Instagram in February, “I’ve gotten over the fact that guys in other bands (the 1975, Foster the People, Smashing Pumpkins, Slipknot, etc.) feel a need to talk badly about my band for whatever reason. I don’t feel anger towards them actually, just more of a sadness that this industry embraces, even celebrates this mentality. I wish it felt like a place where artists stood by each other and supported one another — regardless of our different tastes and voices.”

Smashing Pumpkins frontman Billy Corgan later responded on Instagram, “Dude has a problem where there is no problem. Don’t believe I’ve ever said anything negative about them. He’s so big now he’s inventing imaginary enemies.”

Foo Fighters are set to perform in Croatia this week for a great cause, Croatia Week reports:

“Fans at the concerts will be able to take away memories from it in the form of special limited-edition posters were have been created specially for the band’s first gigs in Croatia.

The Foo Fighters, who own the rights of the posters and concert organisers have announced they will donate all proceeds of the poster sales to the families of workers at troubled Croatian shipyard Uljanik in Pula.

The shipyard has closed down and last month bankruptcy proceedings for the financially troubled shipbuilder in Pula were launched.”